Of Bird Feeders, BoBo's/MotMot's and Squirrels
at the
House of Connections in Escazu, Costa Rica! 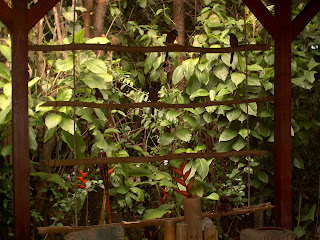 I have my own issues with feeling "confined" so I don't see myself as one to possess animals, as karmically, I don't want someone to "confine" me!!  I remember living in San Francisco and watching the animals from windows - staring out at the world below.  I could feel their longing! (ok - so maybe it's MY OWN issue around being "confined"!!).  Yet I seem to have this "Saint Francis" connection with all sorts of animals!  Even the meanest dog around will come up and lick me.
So I moved to Escazu - where my office opens onto this patio that is surrounded by a little creek and a bunch of trees which of course brings in all sorts of birds, butterflies, squirrels and more.
The first animal to TRULY move me was this BRILLIANT

BoBo's/MotMot's
(Momotus Momota) bird -
with his turquoise crown, big yellow belly with black dot in the middle and irredescenty back with a funky tail!!!!  He came around and I started giving him bread (hey - I'm a City Girl - I didn't know what birds eat other than feeding them bread crumbs in Piazza San Marco in Venezia, Italia!!). 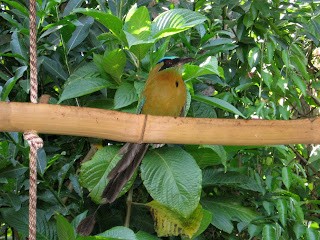 WHAT THE BIRDS EAT
So I post on http://groups.yahoo.com/group/CostaRicaLiving Message Board (the largest Costa Rican Message Board) asking what to feed them as I wanted to see more of this brilliant bird!  Henry Kantrowitz (aka CRBirdMan) shared that Plantains are more digestible for them.  Bananas are good but Henry said surprisingly bananas are actually hard on the digestive tracts of most fruit eating birds.  He also said they also like to eat large spiders, earthworms, insects, small lizards and snakes as well as fruits as well as bread from feeders.  (ok, so I own that when I don't have the healthy stuff, mine get crackers, bread and whatEVER leftover food that my guests bring back [and what they don't eat, whatever it is that comes out in the middle of the night will eat it].  I've gotten reamed by some people for feeding them the processed "stuff" because that's not their natural habitat but, trust me, these animals are NOT lacking for eating off the land!!!  They're just EXTRA SPOILED at my place!!)
Mine LOVE Papayas the most (which Henry said attracts less insects than bananas) AND MY squirrels do NOT seem to like that so out of all the fruit - to give the birds a chance to eat and keep the squirrels away - MY preference is Papaya!! 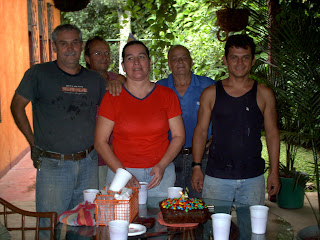 to create something which was WAY COOLER than I'd ever dreamed.  He did it simply out of bamboo and some rope: 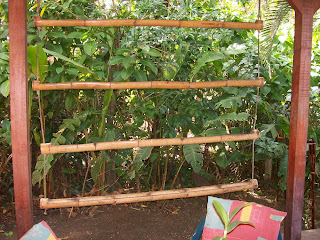 
Now, each morning and afternoon around 3pm, 20++ birds (at least 10 different species) and 6 squirrels come to feed on this Feeder. 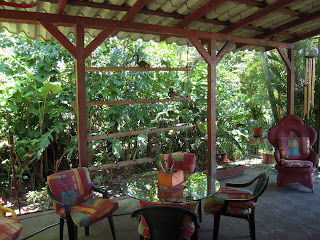 If they're not already waiting for me when I get up (which varies SOOOO MUCH), all I do is go out and call "Mr. BoBo, pajaros, benga comida" (ok, so I'll never win American Idol) and I swear to you, within 2-5 minutes - they ALL come flying in/ swinging/jumping from tree to tree!!
It's the COOLEST thing!!!
And if I'm not out there - right around 3pm - trust me, they're out there reminding me!! 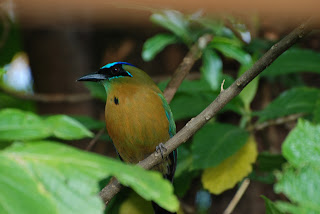 (photo by Jerry Koenke - Sarasota, Florida)
MR. BOBO
My "BoBo Buddy" will TALK TO ME if I'm ignoring his food needs!!  He's got this DEEP sexy sound!!  And I sit there and tell him how beautiful he is (in English AND Spanish - I guess the tone is international!!!) and he "gives me tail!!" - he literally makes his tail go around in a circle (see video). 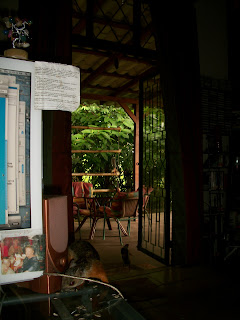 SPAZ
I've named one of my squirrels "Spaz" because she's fricken SPASTIC if she doesn't get her food NOW!!  But she's the FUNNIEST/CUTEST thing around!!!
If the doors from my office onto the patio are not open, she (and all her buddies) climb up the grates on the windows and Spaz LITERALLY "knocks" on the window or throws her body against it!
Once I open the door, she literally comes to the door and I swear - stands on her hind legs and goes into a praying position looking right at me!!  Then she proceeds up to the bookshelves where I USED to keep her food (now I hide it more since she was leaving such a mess with the shells).
IF I ignore her are am not in my office, first she knows to go around the front to see if anyone has left the front gate open and she just walks on in and helps herself to the bag of girasol/sunflower seeds!!   OR - recently, she's gnawed through the screen in the windows in my "Well-Being Sanctuary" to get in. Like I said - SPAZ!!!
So recently I put a trail of seeds leading a trail from the office/patio door to my desk and put some on my desk!!  She GOT IT!!
RECENTLY I got her EATING OUT OF MY HAND by feeding her a Banana!!!  It's SOOOOO COOL!!!
@@@@@@@@@@@@@@@@@@@@@@@@@@
So the lesson here possibly?  Do you ever feel CONFINED, not able to be free to roam/do as YOU desire??  Might there be some area YOU are Confining someone??  If you would like more freedom, then can you truly take away the freedom from anyone/anything else? KARMA!!  I welcome you to consider it.  Perhaps this is why YOU are not feeling free????
Posted by A Gay Guide to Costa Rica at 1:38 AM

Squirrels can be quite dangerous... I once had one try to take a bite out of my arm... Of course I was trying to get him out of a dorm room...

But that's a whole other story.

Thanks for the great post and for linking to our site as well!

Jonathan
Travel the world with Carrie and Jonathan