I (NOT my body) REALLY like Ice Cream - especially flavors with some sort of crunchy thing in them (I used to drive 30 minutes from Sarasota to Port Charlotte, Florida to Sweet Scoops for THE BEST Homemade Peppermint Stick ice cream I've EVER had!!!) - or more natural stuff. 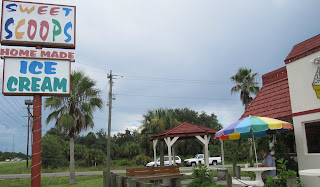 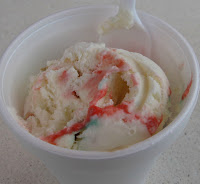 If you LOVE ice cream and especially if you are an Ice Cream Snob/Conneseuer - you might want to think twice about moving to Costa Rica.

When I first moved to Costa Rica, July '05, the only option I had was the basic/plain Tico ice creams (much of it, being more "sensitive", I can taste the chemicals).

Being in a country where one of the BIGGEST "GIFTS" of being here is to teach you how to Go-With-The-Flow - or make your self crazy - and being one that finds the positive in most things - I looked at it as this was just a way to loose a few pounds!!

But I was REALLY REALLY CRAVING my Ice Cream - ESPECIALLY BEN and JERRY'S!!!!

Feb. 2008 was the first time I discovered BEN and JERRY'S ICE CREAM - at AutoMercado in Escazu (San Rafael - Plaza Atlantis)!!!!  There - in the ice cream / helado section was . . . . Chunky Monkey, Cherry's Garcia and a few others!!!

At first it was close to $9 a PINT and over the years I've seen it see-saw between $7 and +$9 (with those kind of prices, it's something I only treat myself to once every 2-4 or so months [in all fairness, with the price of gas - hence effecting shipping costs as well as freezer containers - it's not a cheap process to get it here])

IMPROVISE (aka TicoIze!!)
Work with what we have!!   So when I'm craving Chunky Monkey and don't have/want to put the $$ out, I 1/2 freeze or 1/2 thaw a bunch of bananas and I just put it in my Magic Bullet (mini-blender) and in seconds - I have what is all creamy like dairy - but you've added NOTHING else to it!!!  Sometimes I'll fold in toasted walnuts and chunks of chocolate into it.  SOOOOOO EASY, MEGA cheap dessert, and - HEALTHY/good for you!!

For a faster version of TicoIzed "Chunky Monkey", just mush down/blend the bananas and add it to softened vanilla ice cream (since I have a dairy intolerance, I use Delactamy vanilla "ice cream" [though it's NOT FULLY lactose-free I've been told]).

My other FAV ice cream is Cookie Dough and we USED to be able to get Pillsbury Slice and Bake chocolate chip cookie dough but not any more, so if you're craving it, just make up a batch of chocolate cookies (UNcooked [MY FAV way to eat them!!]) and fold it into Vanilla ice cream!