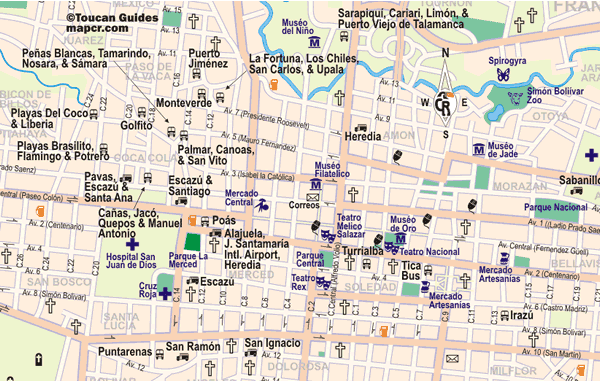 This is the best Map I've found so far that indicates where various Bus Depo's are BUT - it's OLD so I KNOW there have been numerous changes and I'm not a bus person so if you see this and know of some changes.  Email me at LivingLifeInCostaRica@gmail.com

In Costa Rica ALL roads lead to San Jose -
meaning - most buses originate in San Jose and branch off to wherever.  RARELY at this point do they go to a city "next" to it if it's not ON the way (example - there are no buses that go from Escazu to Rohrmoser/Pavas - the next city North of them) - which translates to - if you're busing it - you GET to go BACK into San Jose to catch that other bus!!
Going exploring around Costa Rica by bus?  It's VERY CHEAP and pretty safe - though MOST do NOT have Bathrooms and many do NOT have Air-Conditioning (at least the cheaper ones and slowly I'm seeing more newer/nicer buses coming in.  FYI - if they say they have A/C or a Bathroom - it doesn't always mean it's working!!  Just be prepared to go with the flow in Costa Rica.  I need to stop drinking water a couple days in advance!).

ALWAYS DOUBLE CHECK before relying on ANYTHING you see in print as things are CONSTANTLY CHANGING in Costa Rica!!

MAJOR HOLIDAYS WHERE BUS SCHEDULES TEND TO BE EFFECTED:
Easter / "Samana Santa" - This is a HUGE holiday time - especially heading for the beach.  MANY buses schedules will change around the Friday the week before Samana Santa week.  Note that MANY buses do not have much service the Thursday and Friday before Easter weekend.

New Years Week before (and often the week before Christmas also) -  Another HUGE holiday time - especially heading for the beach.  MANY buses schedules may change as early as the Friday close to the middle of the month (all depending on when these holidays fall each year) but at least a few days before the holiday & the day after or Sat. or Sunday.

(on one of my visa runs I called a certain bus company and got a time - but I'm quite intuitive and that intuition told me, MAYBE it wasn't correct, so I called back.  That didn't "feel right" as well so I called back again - 3rd different message.  So I decided to arrive about 15 minutes from the earliest time I was given and they had a 4TH DIFFERENT time listed.  So they gave me a little piece of paper with the "latest schedule" on it.  So the next morning - I rush to the Costa Rica border at Peñas Blanca to catch the bus back and guess what - I had missed "that bus" but 1 hour & the next one wasn't leaving for another 1-1/2 hours!!!  GRRRRRR!!!!!Below are my FAV Bus Resources for them.


Traveling around Costa Rica by bus?  This is the OFFICIAL Costa Rica Tourism department (ICT) VisitCostaRica.com site's BUS SCHEDULE that has the Destination • Terminal Location, Company Name and Phone Number • Frequency • Time it Starts or Goes • Time it Ends • How Long it Takes (no prices)(it downloads onto your computer):


OTHER SITES WITH BUS INFORMATION:
AnyWhereCostaRica.com/transportation/bus
This doesn't even have the new/faster coastal route Dominical bus - BUT - they at least have the bus line's phone number.


TheBusSchedule.com/cr
Is a site where you input where you're departing from and where you're going to - BUT, so far I haven't had much luck with it. Also, I've found that if you don't use the "accents" (like tildees, etc.) it might not show up - so if you have an English keyboard - you might not have much success!!
IF it does come up - they have the phone number and often the link to the bus company - BUT BUT BUT - just because it's the bus companies website does NOT mean it's current!!!


Costa-Rica-Guide.com/BusSchedule.html
This is a pretty cool one - ESPECIALLY because it has PRICES (though they're constantly changing but at least it gives you a base and I THINK this is OLD info).


BUS TICKET PURCHASING SERVICE:
CostaRicaBusTickets.com
(this is a VERY helpful service - ESPECIALLY usedful for people not living in the metropolitan Central Valley area or coming from outside of Costa Rica [especially if you plan on entering Costa Rica with a one-way ticket which you can NO LONGER DO if you do not have Residency here - and you need that bus ticket proof you're leaving Costa Rica within 90 days] to for reserving•getting bus ticket though there is a fee involved of course since they're bringing you EASE into your life and taking care of it for you!)


PRINTED BUS MAPS
I've heard that at the Tourist Office in San José Centro (underneath the Plaza de la Cultura - next to the Museo de Oro), they have printed bus schedules which they provided for free on request.


SEE WHAT THE BUS FLEETS LOOK LIKE
(so you know what you're catching if you need to run after it)
and learn more about the various buses around Costa Rica at
InfoBusCR.blogspot.com


Did you know that some cities give
FREE BUS PASSES to SENIORS
Read my article at:
LivingLifeInCostaRica.blogspot.com/2013/04/FreeSeniorBusPass.html


Here's a GREAT FREE MAP of COSTA RICA
that you can print up yourself (NOT buses):
MapCR.com/information/8673/2/Costa-Rica-Free-Costa-Rica-Maps.html


Was this list helpful to you?  Did it bring you more ease?  Did it help your business?
PLEASE consider making a
DONATION
to help keep this site/me alive since Donations are my only source of income these days.  ANY amount of appreciation you'd like to show is welcome!
See the top right corner of this blog for how to do that.

Please "SHARE" this link with all seniors you know could benefit from the information:
LivingLifeInCostaRica.blogspot.com/2011/02/bus-schedules-costa-rica.html