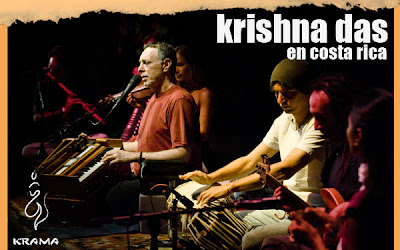 http://KramaYoga.com/site/es/2012/01/13/krishna-das-en-costa-rica
WHEN•FECHA:  Saturday•Sabado - 18 de Febrero  -  8pm
WHERE:  KRAMA Yoga Center - Guachipelín de Escazú, 1km al NO de Multiplaza, contiguo al Colegio Blue Valley, OfiBodegas Capri #1.
¡Medita Kirtan, canta Kirtan y baila Kirtan!
COSTO•COST:
GENERAL: $35
DIA DEL EVENTO•DAY OF EVENT: $45
VIP: $55
VIP DIA DEL EVENTO•DAY OF EVENT: $65
PAYMENT:  Para cancelar y reservar su espacio:
Lo puede hacer en efectivo, cheque o tarjeta de crédito en nuestra oficina, o depositando a la siguiente cuenta a nombre de Krama Yoga Center S.A
BAC SAN JOSE
DOLARES:
# 912758638
CUENTA CLIENTE (SINPE):
10200009127586382
CED JUR: 3101467818
Favor enviar copia de transferencia a Info@KramaYoga.com
BIOGRAPHY of KRISHNA DAS
http://KrishnaDas.com
http://google.co.cr/search?q=krishna+das&hl=es-419&client=firefox-a&hs=rK&rls=org.mozilla%3Aen-US%3Aofficial&prmd=ivnsl&source=lnms&tbs=vid%3A1&ei=NkBcTa2jJ8OqlAehlLnjCQ&sa=X&oi=mode_link&ct=mode&cd=3&ved=0CBAQ_AUoAg
Layering traditional Hindu kirtan with instantly accessible melodies and modern instrumentation, Krishna Das has been called yoga’s “rock star.” With a remarkably soulful voice that touches the deepest chord in even the most casual listener, Krishna Das – known to friends, family, and fans as simply KD – has taken the call-and-response chanting out of yoga centers and into concert halls, becoming a worldwide icon and the best-selling chant artist of all time, with over 300,000 records sold.
KD spent the late ‘60’s traveling across the country as a student of Ram Dass, and in August 1970, he finally made the journey to India, which led him to Ram Dass’ own beloved guru, Neem Karoli Baba, known to most as Maharaj-ji.
Given the name Krishna Das, KD began to chant as part of following the path of Bhakti yoga – the yoga of devotion.
After 2-1/2 years with Maharaj-ji, returned to USA – alas, 6 months after his return, word came that Maharaj-ji had died.
He took solace in music, finding peace and strength in both his Bhakti yoga practice as well as in such heroes as Ray Charles, Van Morrison, Steely Dan, and Bruce Springsteen (whom he laughingly calls “the Bodhisattva of New Jersey”). KD also co-founded Triloka Records, a California-based label specializing in world music, releasing such artists as Jai Uttal, sarod virtuoso Ali Akbar Khan, and legendary jazz musician/composer Jackie McLean.
In 1994, KD started leading chant at Jivamukti Yoga Center, NYC, with an ever-growing audience of yoga students which has led to chant with people all around the world.
Since 1996 KD has recorded 14 albums including his latest ones ‘Heart as Wide as the World” and ‘Chants of a Lifetime’ (book + CD).
“The chanting just hits you and you want to be a part of it,” KD promises. “That’s the point of this whole thing. That’s what cuts through all the ‘stuff’. You get lit up. You don’t have to know what it means.”
PATROCINAN•SPONSORS
Nature Air - http://NatureAir.com   y/and  Fiesta Total - http://FiestaTotal.cr
.
Posted by A Gay Guide to Costa Rica at 10:15 PM