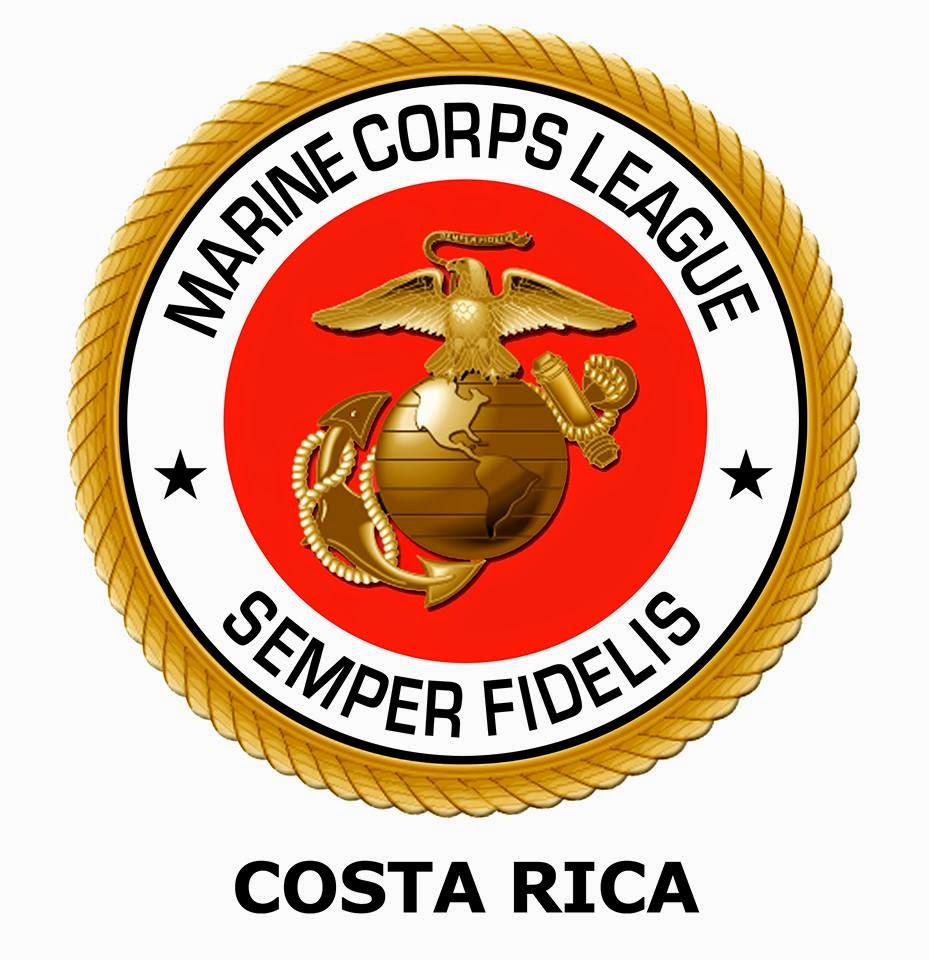 
This is an opportunity for U.S. Marines to associate with other Marines to preserve the traditions and promote the interests of the United States Marine Corps.
Their goal is to offer camaraderie to Marines and Naval FMF Corpsman living in Costa Rica, and to give back to their adopted country.  A lot of focus on what they do (year around) is helping orphaned children and poor children.
MORE INFO ON THEM:
WeLoveCostaRica.com/public/Once_A_Marine_Always_A_Marine.cfm

PLUS
ALL Honorably Discharged U.S. MILITARY VETERANS are eligible to join as Associate Members 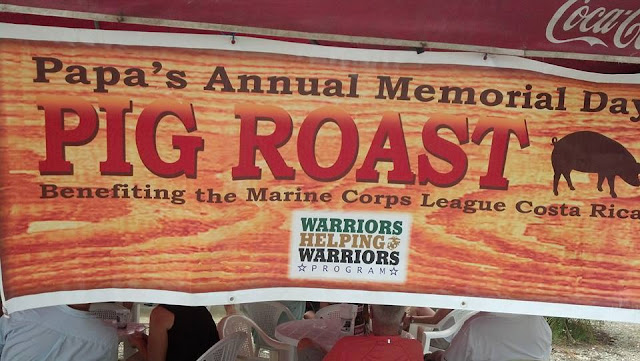 (THANX Theresa Knight for the pic!)

2015 EVENTS•PROJECTS
Papa's 14th annual MEMORIAL DAY PIG ROAST
facebook.com/events/1626651374221000
benefiting the Marine Corps League Costa Rica's
Warriors Helping Warriors Program.
Food served around 2 pm. Food is free - we only ask for donations which this year will go to the Wounded Warriors event 2016.
There will be 4 bands or more throughout the day.

LOCATION:
Rancho Leon  -  Paquita
(on the main road - just before you get to Quepos.  There is a gas station on the right and 50 yards on the left is Rancho Leon  -  facebook.com/HotelRanchoLeon 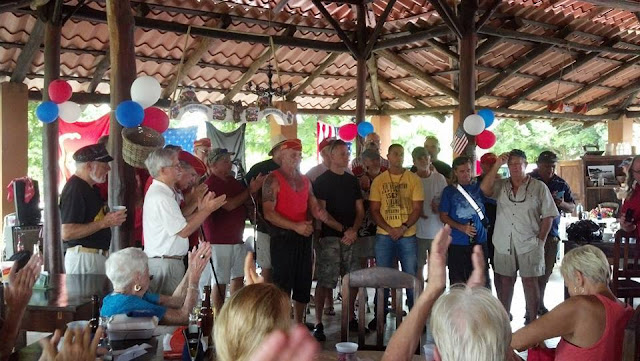 (THANX Theresa Knight for the pic!)

It was such a BIG SUCCESS that they hope to bring some more Marine's down in November!!!
To DONATE towards this event go to:
MCLeagueCR.info/donors.html

and all that helped organize this event and donated the $6,500 to make this happen.


MEETINGS:
2nd Saturday of each month at 11am-12pm/noon+
(they usually have about 30 people attending their hour long meetings and most stay for the no-host lunch afterwards which is a tasty bbq ribs Casada and drink (5,000-c).
Wives and guests are welcome since they’re ALL “family”.
Sometimes they ask for contributions towards various causes•needs at the meeting so bring some extra $$ to share
(I - Vicki is adding this comment - not the Marine's!).
They even have members in the U.S. that help support their efforts! 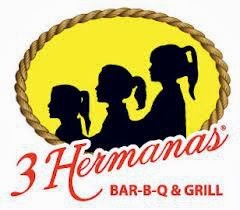 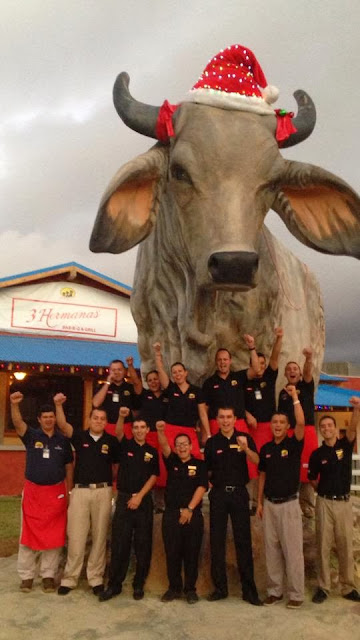 
EVENTS•THINGS THEY’RE INVOLVED WITH•DO
(many where they also can use your help):
They also participate in: 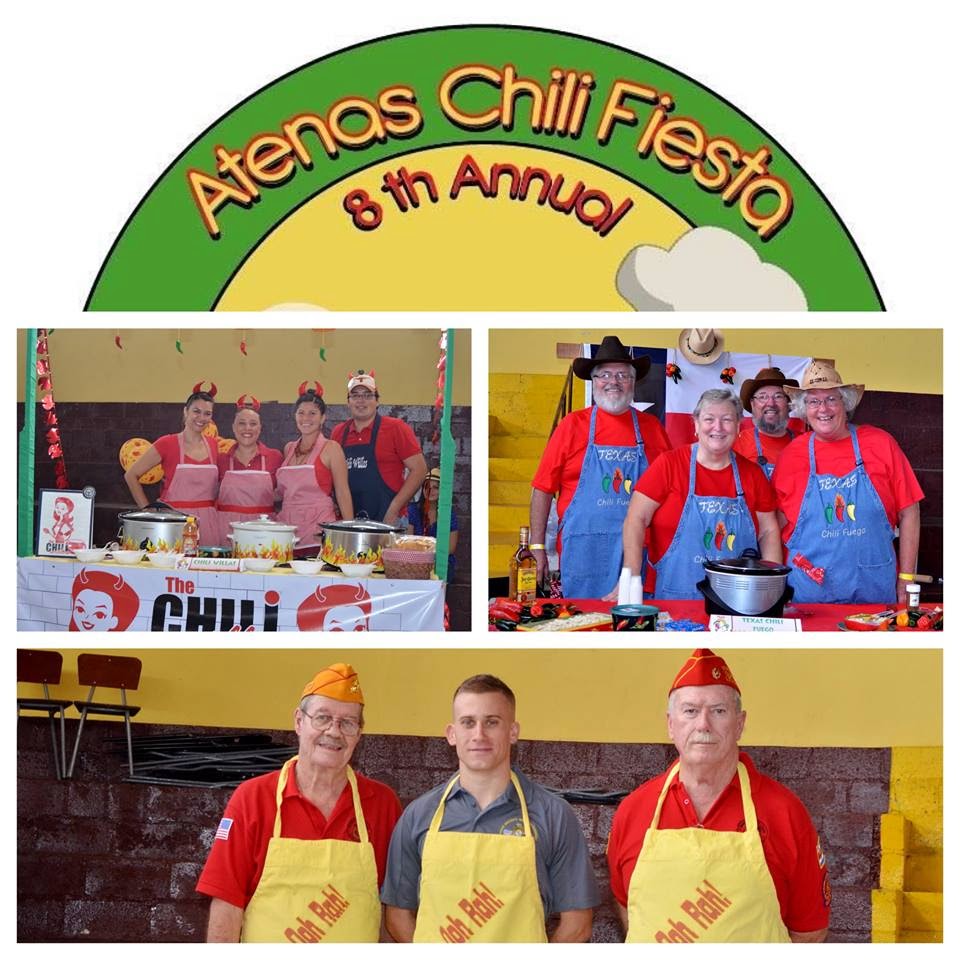 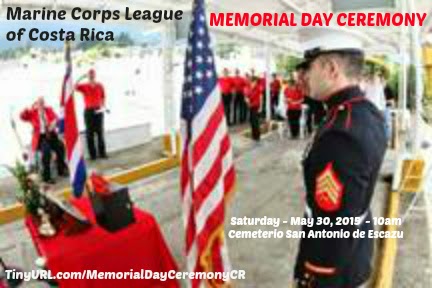 •   2015 - Saturday - May 30 - MEMORIAL DAY CEREMONY at 1000 hours/10am at the Cemeterio San Antonio in Escazú along with American Legion members and friends where they dedicate roses to the 6 Marines buried there. All are welcome. Uniform of the day requested.
After the ceremony they will have lunch at RostiPollo restaurant in Escazú - 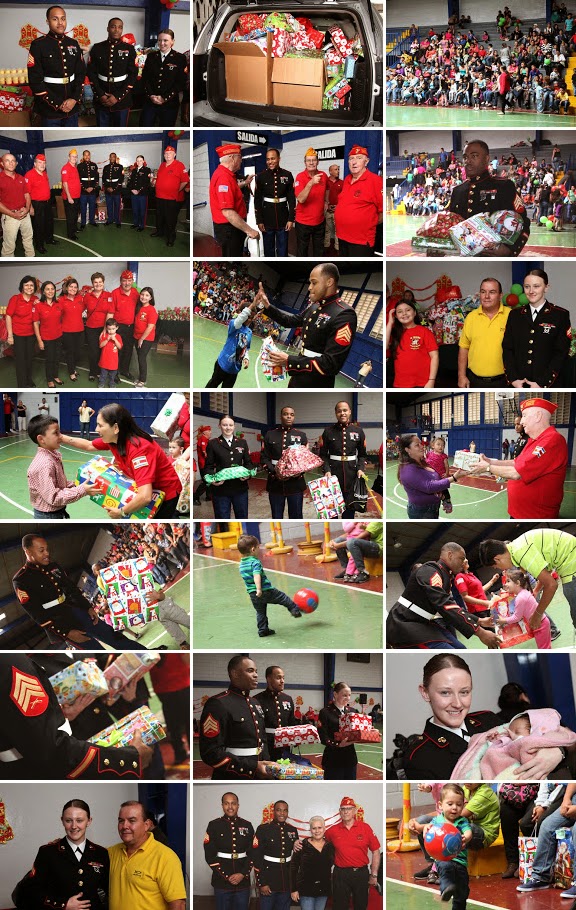 •   December  -  Marine Corps League’s Christmas Party (members and guests - instead of the monthly meeting.  Bring an unwrapped toy that they can donate to the U.S. Embassy Marine Corps Security Detachment annual “Toys for Tots” program).
They collected 350 toys to the Seeds of Love Foundation and Horizon Church in Jaco and Barrio Corazon de Jesus in San Jose


REALLY NEED TOYS (and cash)
(and it can be collected year-round so it's never too late to donate.  Bring them to a meeting or event or contact the organizer to work something out).  In 2015 they donated 330 toys that go to a different school in a poor area.


CONTACT:
ToysForTotsCR@gmail.com or Bill Enell or drop off toy donations year-round at Tres Hermanas Restaurant [which is not far from SJO Airport if you're a tourist coming in and want to give back to•help the people of Costa Rica] and Migracion])

and other events throughout the year!


PLUS
There are other perks of being a member and/or vet in general.

In Hospital Metropoliano in San Jose?
If you’d like, one of the Marine Corps League members will come visit you along with their Marine Corps chaplain (Jerry Thomas) and you can borrow some of these Audio Books and a cd player while you’re there.  This service is good for ALL Vets (ALL branches of the various services.  Notify Bill below or your rep at the hospital)
(fyi - Hospital Metropoliano is THE hospital for vets as they’re the only one currently officially working with TriCare and Champus)

MEMBERSHIP:
$30/year
Meetings are FREE
(you just pay your own lunch if you desire to stay)

(tell them Vicki with the blog Connected you!!!)

He is ESPECIALLY helpful when someone has DIED in Costa Rica as:
•  he is connected and can assist you with dealing with the U.S. Embassy and all things associated with the death, funeral homes, burial, cremation, etc. (he speaks Spanish)
•  he has the contact to get a BIG discount on cremation or a smaller discount on burials
•  he has access to the Arlington Cemetery style tombstone and
•  Military Issued Burial Flags
•  he's happy to attend the funeral and gather some other vets - as well as present the official Burial Flag
• He’s even been known to scatter ashes at sea - in uniform - sometimes with some other guys!

Mel’s a VOLUNTEER with American Legion Post 12 of Golfito, Marine Corp League of Costa Rica and a Warden with the U.S. Embassy
(he seems to be their UN-Official Go-To Civilian Guy!!).

Mel does all the does out of the goodness of his heart and his pocket (so PLEASE, GIVE BACK to him on SOME level if he helps you.  He's such a sweetie and MENCH!!)


For more info on other
RESOURCES FOR U.S. VETS•VETERANS LIVING IN COSTA RICA check out" 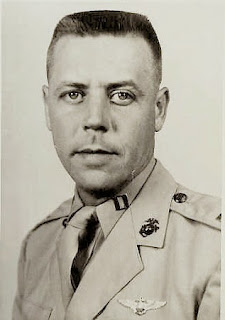 (I share this here as its a SMALL world and ya never know when there's someone out there that served with him and I'd LOVE to meet you!!  Contact me - Vicki Skinner [aka THE Sarong Goddess] at:
LivingLifeInCostaRica@gmail.com

Military History of Capt. "Bill" Wilbur Eugene Skinner
He first was drafted in 1953 & chose the U.S. Naval Cadet (NAVCAD) Pilot Training Program at the Naval Air Station in Pensacola, Florida where he learned to fly A4 Skyhawk jets.

After he completed flight school, he had the choice of remaining in the U.S. Navy as a pilot or transferring to the U.S. Marine Corps. He chose the Marines.

He served 18 months overseas in Japan around 1958 and 1959 and then was transferred to the Naval Air Station Whiting Field in Milton, Florida.

After some time, he was transferred to the Beaufort, South Carolina Air Station - Squadron VMA 324.

During the Cuban Missile Crisis in October 1962, Billy and his air unit (VMA 324) were stationed in Key West, Florida, only 90 miles from Cuba, ready to attack Cuba if the Russians didn’t withdraw their missiles from Cuba. Russia did remove their missiles, combat was averted, and Billy’s unit left Key West.

In July 1963, his Squadron VMA-324 (out of Norfolk, Virginia), was assigned to the U.S.S. Independence aircraft carrier and he was deployed to Europe.

His last mission was an annual NATO exercise on August 18, 1963 where he launched from the deck of the Independence in Bay Biscay - west of France and east of Spain.  After doing some war simulation exercises he called in to the military Air Traffic Controller (U.S. Air Force Air Traffic Controller mis-set the range on his scope which caused him to miscalculate/misread the radar & led him down below the cloud cover in the mountainous Ballon d'Alsace area near the Swiss, French & German border (scene to MANY MANY plane crashes as well as on the Tour de France bicycle run route) which was within a 20 miles radius closer than the controller thought.  Unfortunately there was a mountain ahead and when he realized it, the plane had clipped the tops of the trees which caused him to loose balance.  He bailed out but because of the angle, was thrown into trees which caused him to die on impact and the plane crashed into the mountain.
(we heard the air traffic controller sadly had a nervous breakdown from that).There was big problem with low fog in that region and because of this they ended up losing 3 A-4C's and 2 A-4B's with 2 of the pilots dying just a couple weeks into that deployment.


Please "SHARE" this entry with ALL U.S. Marine Vets living in Costa Rica!