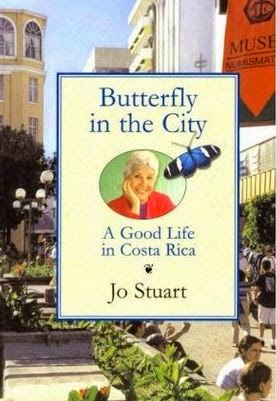 A memorial for Jo Stuart!

BRING:
It is a potluck, so bring a favorite dish, boca, dessert (Jo liked chocolate), wine, cheese, or whatever your heart desires.


DIRECTIONS TO LENNY AND JOANS IN LA GUACIMA
FROM EAST TO WEST - SAN JOSE • ESCAZU • SANTA ANA • CIUDAD COLON:
Take the new pista (Pista del Sol - #27) West to the La Guacima exit.
At the top of the off ramp turn LEFT (IGNORE the sign that says right to La Guacima).  **After about 1/2 a kilometer turn LEFT at the first paved road (there will be 2 small dirt roads on your left before.  At there street there is an ATM and Ferreteria Materiales Ure and VARPE on the corner).
Go 600 meters to the large tree on your left that forms a canopy over the street - #88.

FROM WEST HEADING EAST ON PISTA DEL SOL - #27 (Atenas, La Garita, etc.):
Take the same pista Eastward to the La Guacima exit.
Turn RIGHT at the top of the exit.
**400 meters turn LEFT at the first paved road (there will be 2 small dirt roads on your left before.  At there street there is an ATM and Ferreteria Materiales Ure and VARPE on the corner).
Go 600 meters to the large tree on your left that forms a canopy over the street - #88.

FROM BELEN:
Take the main road through San Rafael to La Guacima about 9 km.
Do not go through any side streets that have stop signs.
The main road curves sharply left then right past side streets with stop signs.
Go as you would if you were heading to Los Reyes.
After you cross over the highway, **go about 1/2 a kilometer turn LEFT at the first paved road (there will be 2 small dirt roads on your left before.  At there street there is an ATM and Ferreteria Materiales Ure and VARPE on the corner).
Go 600 meters to the large tree on your left that forms a canopy over the street - #88.

PEOPLE SHARING THEIR COMMENTS ON THE LIFE OF JO STUART
AMCostaRicaArchives.com/2014/04/in-memory-of-jo-stuart

You can still buy Jo Stuart's BOOK
"Butterfly in the City: A Good Life in Costa Rica"
Amazon.com/Butterfly-City-Good-Life-Costa/dp/1475049013

Ms. Stuart suffered a stroke at home Friday and had been hospitalized since.

For nearly 14 years Ms. Stuart provided a liberal voice to the newspaper, and she made many friends though her writings. Her son, Justin Dahl, noted Thursday that his mother loved Costa Rica, and that was reflected in her writings.  She also loved the bustle of downtown San José and frequently included anecdotes from her daily travels in her column. There was no accident when she titled her 2006 book "Butterfly in the City."  Ms. Stuart grew up in Jamestown, New York, one of four children raised by a widowed mother. For the time she was unconventional, a trait that she nurtured through her life.  From 1955 to 1958 she and her then-husband operated the Dahl Theater in Hollywood. Later she worked at the International House at San Jose, California, State University and at the same time earned a master's degree in anthropology.  She loved travel, and for a time lived in Majorca. When she retired at San José State, she explored other countries and settled here in 1992.  She honed her anthropological skills in Costa Rica as a consummate people watcher, the results of which frequently showed up in her columns. Her weekly effort also demonstrated her frugal nature. She loved weekend ferias, the farmer markets, and curiously, roulette.  She continued her passion for the theater by being a member of the Little Theatre Group here in Costa Rica. Her first role was that of a bag lady.  Ms. Stuart was a familiar face at the Casino Colonial and at the Hotel Corobici in Sabana Norte where she lived. She was known to many of the casino employees as the U.S. woman who kept track by writing down each winning number on a small pad.  She also was involved with a local book club that had a number of published writers as members and the local Democrats Abroad.  "The last part of her life was the best," said her son Thursday. He lives in San José, California.  Ms. Stuart also is survived by a daughter, Lesley   Dahl of Corrales, New Mexico, who also came this week to be with her mother. Other survivors include two sisters, Annetta Kaufman and Donetta Burnett, both of Florida.  Ms. Stuart donated her body to the Universidad de Ciencias Medicas, the medical school known as UCIMED, in Sabana Oeste. She was a great believer in repurposing and recycling, her son said.  The family is planning a private memorial service this weekend and anticipating a larger one for her friends here in a month, said her son.  Ms. Stuart began her column at The Tico Times. An editor there fired her in 2001. "I was sorry (and surprised) to hear that," she said later. "Actually, I was crushed, but I had to smile, later, because it was my first experience being fired. And I got my first job when I was 12."

She quickly continued her work that year with A.M. Costa Rica. In nearly 14 years she hardly ever missed a deadline, and the few times she did the reason was that she was hospitalized.

Ms. Stuart was known for her appreciation of the country's public medical system.

She defended other liberal causes. Some thought she was a socialist. "Social prosperity does not mean socialism," she said in one column. "It simply means paying attention to the well being, and prosperity of the citizens in general, not just a few."

The writings by Ms. Stuart caused some individuals to move to Costa Rica.

She was proud that this country does not have a military.

Her last column, published a week ago, restated that philosophy. The headline was "Here is a vote in favor of lengthy diplomacy and not bloody war."

Ms. Stuart generated a large following of like-minded individuals. There also were several cranks who heckled her via email repeatedly for her political positions.

Her book, a collection of her columns, is subtitled "A Good Life in Costa Rica." The book still is in print. Many of her recent columns can be found on the newspaper archive site

Please "Share" this post with everyone you know that knew Jo Stuart!
LivingLifeInCostaRica.blogspot.com/2014/05/MemorialForJoStuartCR.html
.
Posted by SarongGoddess at 8:36 AM