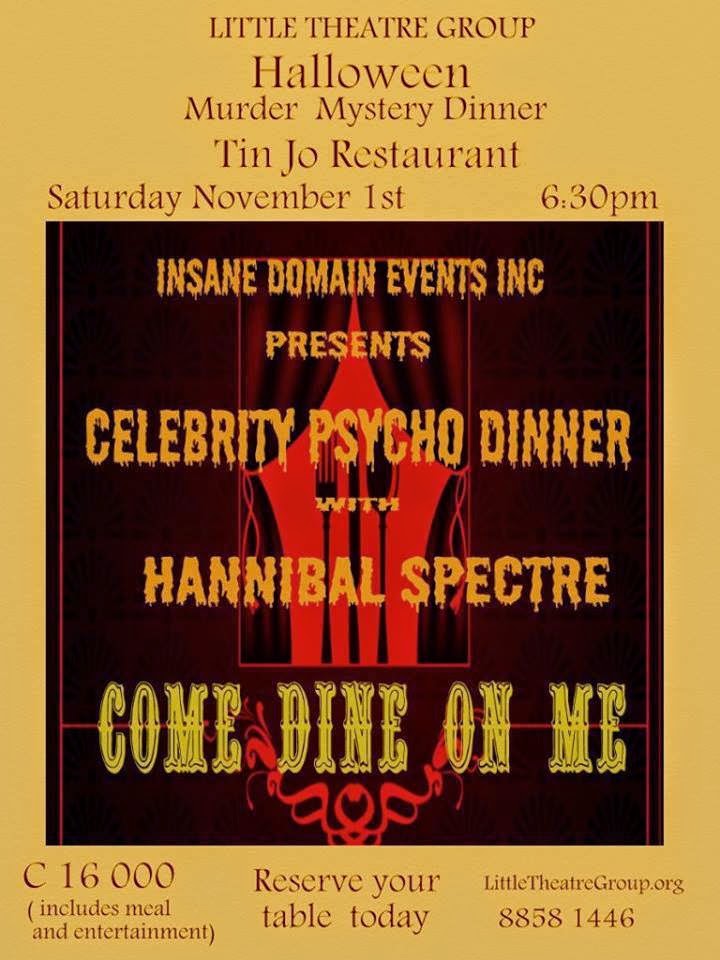 A Halloween Murder Mystery Dinner for the Halloween madness this year.
The Bamboo Room Tin Jo will host COME DINE ON ME...featuring special celebrity psychopath HANNIBAL SPECTOR and a host of zany Halloween characters.
Murder is on the menu so beware...
Reservations are required as Seating is limited...
There is safety in numbers so be sure to invite your friends!!!!!


RSVP:
Seating will be limited and must be reserved in advance and are ONLY obtainable from LTG by calling:
8-858-1446
OR
online at - LittleTheatreGroup.org/reservations.html 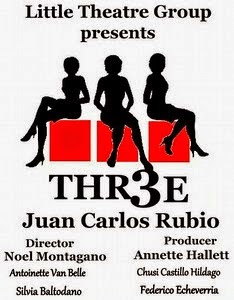 This is the play that was performed at the recent Feria de Libros to an audience of over 200. It was so well received that we are re-staging it for our members/the public.

Juan Carlos Rubio
Born in Montilla, Córdoba, in 1992 Juan Carlos began to combine his work as an actor with television screenwriting and writing plays for the stage.
He has premiered his works in many Spanish speaking countries including Costa Rica.
(100M2 NTC March 2014), and has been the recipient of numerous awards and prizes both as a director and as a writer.
TRES is just one of 20 scripts to his credit

Roger Pettitt
Roger started translating with two long novels by Luis Murillo of Madrid, and then he saw a play in Cordoba, Spain, by Juan Carlos Rubio called “Tres”.
The play ran for three days to packed houses and the audience were laughing their socks off nearly all the way through.  Roger contacted Juan Carlos and offered to translate it into English.  There followed two other translations and all three have been accepted by a theatre agency in London.

Juan Carlos is continually writing, when he is not directing something, so Roger is looking forward very much to the next one!


ADILA
Asociación Desarrollo La Asunción
This a new venue for LTG, It is an active community center located behind the football field in Belen
We recommend you visit their website LaAsuncion.org for further information 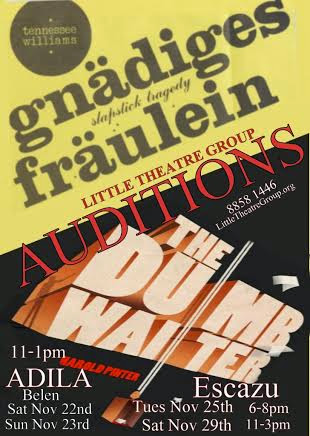 For an appointment to audition, and for further information please contact LTG through their reservations page at LittleTheatreGroup.org or 8-858-1446

MEMBERSHIP
5,000-c/solo.  8,000-c/couple/family
(even though I'm [Vicki] not much of a theatre goer [think about it - Vicki sitting in one place for 2 hours with her mouth shut???? NOT!!!], I still joined as I feel what they offer is VERY IMPORTANT for our community [English-speaking Cultural things] and it's only $10!!  A small "investment" in our community!!)