$7+ LAND EXIT TAX now REQUIRED for people EXITING Costa Rica by LAND (going into Nicaragua or Panama) PLUS you MUST PRE-PAY BEFORE you hit the Migracion•Immigration Office at the border!!!!!!!!!!! 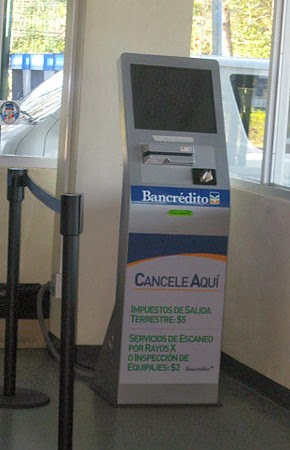 (the LONE atm machine I saw at the Costa Rican border in Peñas Blancas on March 11, 2014.  Can you IMAGINE the lines for this ONE machine for people to service ALL the people that have not PRE-paid for Costa Rica's $7 Land Exit Tax!!   Read what I write about the machine and where to PRE-Pay for this tax below!)


Don't have one of the sources listed below to pay this $7 Land Exit Tax near you?
No way in @#$$ would I rely on the atm machine at the border as it does NOT always function AND/OR you might have a LONG LINE to wait for it if it IS working!

BUT - last I heard, the
ADUANA (Customs)
had opened a NEW OFFICE and you could go to their office to pay for it AT the border (my torn meniscus knee was acting up a lot and I was schelleping luggage so I couldn't walk over just to check for y'all - hence no pictures)


WHERE IS THE NEW ADUANA OFFICE?:
What was described to me was - as you're entering a Peñas Blancas - JUST before the border is a split - going straight•forward leads you towards Nicaragua -
veering to the Left is a one-way street Exiting Costa Rica (so don't go up that way!)
To the left of that are LOTS of PARKED BUSES
Go into that bus lot (I'm not talking about TicaBus or TransNica) and walk all the way back and I HEAR it's a building on your LEFT.

I have not verified if it's the same $7 or if they're charging an extra $1-$2 Convenience Fee as many do.


WHEN I WENT TO THE MIGRACION WINDOW - THEY DID NOT ASK ME FOR MY RECEIPT - WHY?
Some people have shared that the immigration officer didn't ask to see /for their receipt.
That's because when they scan your passport - it already shows up in their system (WARNING!!  This is also they know if you have an airline ticket as proof you're leaving Costa Rica within 90 days so SOMETIMES, if you have a ticket in the INTERNATIONAL IMMIGRATIONS system, they will only give you a ticket for that amount of time.  That happened to one of my friends that had purchased a throw-away ticket for 2 weeks later and guess how long she got her Visa stamp for???  Those 2 weeks!!!)

The fun part is how•where•when TO pay it!!!

This tax effects people EXITING Costa Rica by LAND
(entering into Nicaragua or Panama)
AND
you MUST PRE-PAY it in ADVANCE
because they do NOT have the ability to accept these payments at Costa Rica's Migracion office•window!!

Last time I did a Visa Run there was STILL JUST ONE ATM at the Nicaragua border crossing at Peñas Blancas
They're supposed to have ATM's also at Paso Canoas, Sixaola and Sabalito abutting Panama
(I'm not positive if they have installed these ATM's yet other than at Peñas Blancas)

I was told by an Immigration officer that it's ONLY good for 7 days.

Well, it looks like MANY of the businesses listed below are charging a Service•Convenience Fee to process this for you!  What I'm seeing is anywhere from $1-$7 so - be prepared!
We now have more options till they get the atm running more solidly at the border (which to ME - waiting to get it at the border seems like it will be a NIGHTMARE wait if the crossing is busy - that is IF the ATM is functioning!!):


Click here for a list of their addresses:
www.BanCreditoCR.com/directorio/directorio.html
(make sure you put the www. first as it's ANOTHER one of those Costa Rica websites that was set up IMPROPERLY [I swear they must all have gone to the same school as this problem is prevalent heavily throughout the government sites so if you don't put the www. you get that it's a bad address)
SOME people have sworn they were charged a couple $s here while others said no so . . .

Coopealianza
Bank branches
They seem to have lots more branches in more out of the way places
www.Coopealianza.fi.cr/index.php/inicio/oficinas
(again - make sure to put the www. first)

SELECT TRAVEL AGENCIES
NOTE that MANY of the alternative ways to pay charge a Service•Convenience Fee to give you this convenience.  That price is up to them.  I've seen•heard anywhere from $2-$7 PER TICKET)


WHY ARE THEY DOING THIS?
The head of Hacienda•Tributación says the money will go toward improving the country’s land border crossings and the +$2 is to help pay off the 2 scanners at the border entrance (for the Aduana•Customs [even though last I heard the only scanner was at Peñas Blancas)


**COMMENTARY
(well - much of what I share is some form of a commentary!)
It will be very interesting to see how this will play out since OFTEN "rules"•"laws" are SUPPOSED to happen in Costa Rica - on a certain day - and change just before or after - especially if systems aren't properly in place!!  ESPECIALLY since to GET things "in place" in Costa Rica - can take awhile!!!  My bet is it won't last a day before they put it on hold!  What do you think??

You might want to watch the Facebook pages for the
Hacienda (aka the Dirección General de Tributación) though so far there has been NO mention of ANY of it that I've found and even their website that mentioned it from a few days ago ONLY spoke of the $5.  Oui!!!
facebook.com/TributacionCR

That Departure Tax is
$29
NOW - they HAD passed a new law that it was to now be built into the ticket price (so you would not have to pay it on your own [like much of the rest of the world has done for AGES!]) - BUT - last I heard it was . . . you guessed it -
ON HOLD - for at LEAST 90 more days!!
(note SOME airlines supposedly DO have it built into the ticket so ask)
TicoTimes.net/2014/11/27/travelers-in-costa-rica-can-pay-departure-tax-at-airports-for-3-more-months


Please "SHARE" my page with everyone you know that may be doing a border crossing from Costa Rica in the future:
LivingLifeInCostaRica.blogspot.com/2013/12/New5ExitTaxCR.html
bit.ly/CRLandExitTax .
Posted by Living Life in Costa Rica 1 at 1:55 PM