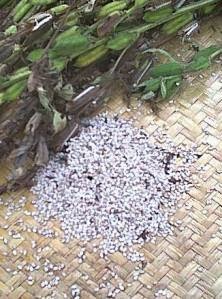 Where to find
SEEDS • SEMILLAS

If you're just looking for standard (possibly GMO) Seeds•Semillas - I find the CHEAPEST places are these Agriculture • Farm • Horticultural store (some sometimes also carry PET SUPPLIES) especially if they sell it in BULK (like MY FAV AgroEscazu has many of!)
Also, your local Ferreteria•Hardware or Nursery•Vivero may have some EPA carries them but trust me, they ain't cheap!!


This link is to various VEGETABLE SEED DISTRIBUTORS (I'm sure none are organic)
Ofinase.go.cr/index.php?option=com_content&view=article&id=129%3Aregistro-de-empresas-comercializadoras-de-semillas-de-hortalizas&Itemid=137&lang=es


SOL NACIENTE
They're a Garden Store with Seeds in packages (their Vegetable seeds are European quality) and bulbs • Plants • Succulents•Suculentas.

Plus they carry Floral decoration • things for Parties • Christmas Decorations • Fake Flowers (silk, plastic and dried) and ScrapBooking.  They distribute retail and wholesale.
Do-It-Yourself Classes•Cursos (classes are 2-3 hours and range from free to just 3,000-c which usually includes the materials!!  They also do classes for kids during their summer break!)
HOURS:
Monday-Saturday - 9am-7pm
LOCATION:
Tibas - 700 meters East of McDonalds
Lindora•Pozos de Santa Ana - 1.7 km North and 300 West of AutoMercado (a block South of the Panasonic intersection•Belen)
facebook.com/SolNacienteCR  •  SolNaciente.com
2-293-0808  •  contactenos@SolNaciente.com


In San Jose there is a great seed store about 25 meters off of Avenida 2nd•Segundo - on the south side - at about Calle 4 and 6 or 8.


As I find more non-organic seeds I'll share them here.


Cuttings • Plants • Seeds
Trade • Sell • Share
in Costa Rica
facebook.com/groups/CuttingsPlantsSeedsTradeSellShareCR
is COMING SOON!!
It will have a list of places to find Seeds to Exchange &/or Swap


Costa Rica and PESTICIDES
It's VERY IMPORTANT to know that Costa Rica has one of THE HIGHEST usages of Pesticides in the world (CR has 51.2kg with #2 being Columbia at just 16.7kg - per NationMaster.com/graph/agr_pes_use-agriculture-pesticide-use - no thanks to the U.S. and "conditions" to "gifts").

GMO's
First off - for those unaware - let's look at GMO's

What is a GMO • Genetically modified organism and why are people making such a big deal out of it?? GMOs, or “genetically modified organisms,” are plants or animals that have been genetically engineered with DNA from bacteria, viruses or other plants and animals. These experimental combinations of genes from different species cannot occur in nature or in traditional crossbreeding.
Virtually all commercial GMOs are engineered to withstand direct application of herbicide and/or to produce an insecticide. Despite biotech industry promises, none of the GMO traits currently on the market offer increased yield, drought tolerance, enhanced nutrition, or any other consumer benefit.
Meanwhile, a growing body of evidence connects GMOs with health problems, environmental damage and violation of farmers’ and consumers’ rights.

Read LOTS more about it at:
NonGMOProject.org/learn-more


Costa Rica and GMO's
Costa Rican's have been trying to get GMO's band for the past year or so and many cities have already banned them - and that's a great/noble jesture, BUT since they carry wide and far with wind - don't you think that GMO's HAVE ALREADY seeped into the country - ALL OVER the world - ALREADY infested WITH these GMO seeds??  Even cross-breaded with our seeds?).
So if you're of the conscious type - it's CRUCIAL that you
KNOW WHERE YOUR SEEDS ARE COMING FROM as MUCH as possible!!


Where to find  ORGANIC SEEDS • SEMILLAS
in Costa Rica

Organic Seeds are NOT easy to find in Costa Rica but I'm slowly finding more and sharing them at:
LivingLifeInCostaRica.blogspot.com/2013/12/OrganicSeedsCR.html


LivingLifeInCostaRica.blogspot.com/2013/12/SeedsInCR.html
.
Posted by Living Life in Costa Rica 1 at 2:35 PM