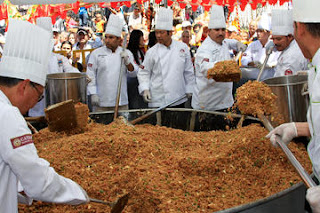 The country will usher in the Chinese New Year with a gigantic arroz cantonés for 11,000 servings.

The event begins at 11 a.m. in the vicinity of the Iglesia La Solidad, a location that the municipality has designed for a future Chinese section. There are two Chinese restaurants there now and a retail store owned by Chinese.

The FREE arroz cantonés will be prepared by more than a dozen chefs from Chinese restaurants. They will use a pan 8 feet in diameter. There also will be Chinese dancing and a dragon.

That is appropriate because today marks the start of the Year of the Dragon in the 12-year rotation of the Chinese Zodiac calendar. The mythical and powerful dragon symbolizes royalty and good fortune, and for believers, the year and those born in that year take on those qualities. Municipal officials will make a symbolic start on the barrio Chino for that reason today.

In a New Year's message, Singapore Prime Minister Hsien Loong said he fervently hoped that the auspicious symbol would prompt his countrymen to have more babies. Singapore is struggling with a low birth rate and a shrinking population. But the nation has seen a baby boom in past Dragon years.

Other Asian countries are also expecting a spike in births in the coming year from parents looking to capitalize on the wealth, luck, and courage said to come from a Dragon-year baby.
http://AMCostaRica.com/morenews.htm