(I'm MEGA starting to updated•enhance this site!! [anyone have extra time on their hands to volunteer to help update it??  Do you speak enough Español to help make calls?  Do you have a car and can drive around to get new info and pictures?  Call me at 8-378-6679 or email me at the address at the bottom]) 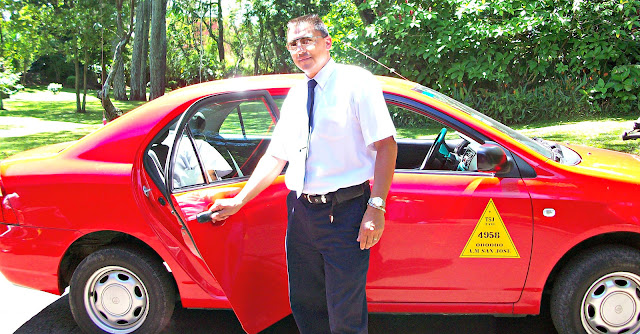 Vicki's (aka THE Sarong Goddess) List of
ENGLISH-SPEAKING
Official • LEGAL

Most of these drivers below speak some amount of English and the one’s that don’t, MY experience has been they are at least pretty trustworthy/reliable. Right now the list is predominately geared towards the Escazu area BUT it’s expanding (with YOUR HELP!?!?!) so keep checking back with my Living Life In Costa Rica site

NEVER NEVER NEVER leave a voice message for a driver (or most anyone in Costa Rica) and expect them to call you back!!  I find that MANY people in Costa Rica don't know how to use/check their FREE voice mail, don't have their password (which is often the last 4 digits of the cell - or 1234) or just don't do it!!!

I'm starting to add where taxi drivers live as well - in case someone is wanting to check out an area to possibly move there and wants someone that extra knows the area - or may have contacts on places for rent or sale (especially that might not be publicly promoted!).

Do you have a LEGAL RED TAXI DRIVER that speaks at least 1/2 decent English and/or gives above and beyond North American level Customer Service to add??

VICKI'S TOP / FAV TAXI DRIVERS
(NOTE:  I say where a driver lives especially in case you're needing a driver either early morning or late night and/or if you're wanting someone to drive you around an area if you're looking for a place to move to).
JORGE Retana  -  6-241-1738  •  RetanaGamoa@hotmail.com
This Jorge is new to me but I was THOROUGHLY IMPRESSED and he's a rarity for evenings•LATE NIGHT!!!  NICE car!
LANGUAGE:  GOOD English
HOURS: Thursday • Friday • Saturday - 4pm-3AM.  Sunday 6am-12pm/Noon
HANGS out at:  ESCAZU Centro.  LIVES IN:  Pavas
PLEASE make sure to tell him Vicki Connected you!!!

GREAT PERSON!!! Jason can also hook you up with REAL Cuban Cigars!!  He's GREAT for Touring you around also!!  (he shares his car with William who's a sweetie but does not speak a lot of English).  NOTE:  Jason would be at the top of my list if he worked longer hours as he's GREAT!!!LANGUAGE:  GOOD ENGLISH
HOURS: Mon.-Sat. 6am-4pm (days and hours can vary and he can extend it if he's touring you around)
HANGS out at:  ESCAZU Centro.  LIVES IN:  Alajualita
PLEASE make sure to tell him Vicki Connected you!!!

GOOD English and Good Customer Service!
HOURS: Monday-Saturday - 6am-7pm (he can be fairly workable as he owns his own taxi).
HANGS out at:  Escazu - MultiPlaza.  LIVES IN:  Ciudad Colon
PLEASE make sure to tell him Vicki Connected you!!!

GOOD English
HOURS: Monday-Saturday - 7am-7pm (he can be workable with the time as he owns his own taxi).
HANGS out at:  Escazu - MultiPlaza-5-star.  LIVES IN:  Moravia


FABIAN Aceuedo ("the Voice•Voz") -  8-954-5958
Fabian is one of my NEW FAV LATE NIGHT drivers!!!  He's a sweetie, conscious, on-time and has one of THE BEST Voices I've heard in Costa Rica (deep and sexy like a radio dj!!!). He does smoke (NOT in the car of course since that's now illegal) so the car does smell of smoke IF that's an issue for you.
LANGUAGE:  Pretty Good English (best face-to-face)
HOURS:  LATE NIGHT DRIVER - Monday-Saturday - 4pm-3am-ISH.
HANGS out at: Escazu-Centro.   LIVES IN•FROM: Centro Escazu for many years.
PLEASE make sure to tell him Vicki Connected you!!!

Mauricio Flores  -  8-698-3774  •  LaLaFloresB@yahoo.com
Speaks a good amount of English.  He has one of THE CLEANEST•most organized taxi I've been in (I wonder if he's a Virgo!).  NOTE:  Mauricio RAPIDLY moved up to the TOP of my list because how ABOVE and BEYOND his job he recently went for me!  I had an 81 year old lady I was helping.  Her husband had recently passed away and she was having to move back to the U.S. as she was not in good health. I volunteered to help her get rid of things, prepare for the move and sell everything.  I was in the middle of deadlines for those things when she got really sick again.  So I called Mauricio to come to my aid as I needed to be there with her.  He went to the pharmacist for her and the market and took care of everything.  A few days later AGAIN he came to my aid when someone no showed on me for putting up the signs for a garage sale we were doing - our last weekend!  Mauricio went to the stationary store to get poster boards, made signs and put them up for us!!  He went WAYYYY ABOVE and beyond what his job description is (taking people from Point A to Point B) and of course I gave him a generous tip!!!  He's someone I KNOW I can rely on!!!
HOURS:  ONLY on Saturday - 6am-4pm.  (BOOOOO for us but YEAHHH for him for his new job)
HANGS out at:  Escazu Centro.  LIVES IN:  Alajualita
PLEASE make sure to tell him Vicki Connected you!!!


FRANK Chicas  -  8-871-2900  •  FrankChicasTours@yahoo.com
REALLY GOOD ENGLISH!!  My Tico Brother!  He owns Enjoying Costa Rica Tours and has 6 legal tourism vans and 5 legal red taxi’s so he can hook you up.  If you REALLY want someone that speaks good English, you NEED to be VERY CLEAR that's what you want if he's not available.
HOURS:  ALL sorts of hours so call him as if he's not available, he can send one of his other drivers (make sure you TELL him if you NEED English speaking driver!!)
HANGS out at:  Marriott Hotel West of the AIRPORT (GREAT for Airport Pick-Ups).

PLEASE make sure to tell him Vicki Connected you!!!

A nice NEW 4x4 Taxi with HANDICAP ACCESS. I like his driving as he drives how YOU like (for me that's like a bat out of hell and he's had some of my "old lady" style people and they loved him!  Just tell him UP FRONT).  LANGUAGE:  Henry understands a fair amount of English and speaks some.
HOURS: Daily usually 8am-7pm (at least).
HANGS out in:  Escazu Centro

MARIO - 8-389-1571  •  8-849-8526
He works LOTS of hours including on Sunday usually, he’s TRUSTWORTHY and RELIABLE and if he's not available or running behind, he's quite good about finding you someone if you ask (a RARE level of Customer Service!!!!).
LANGUAGE:  I think Mario understands a fair amount of English usually but does NOT speak it much (at least not with me!!  I didn’t know how much he spoke till about a year after I knew him because he was trying to help me improve MY Spanish. That was great for me but it lost him a LOT of biz)
HOURS: DAILY - LOTS
HANGS out at and Lives in:  Escazu Centro
PLEASE make sure to tell him Vicki Connected you!!!

Decent English.
HOURS:  He works MANY HOURS - Daily 4am-11pm
HANGS out at:  Escazu.

Good English.
HOURS:  6am-5pm
HANGS out at and Lives in:  MultiPlaza

HANGS out in:  Escazu

GRECIA
•  DENNIS SALAZAR - 8-859-6025 (DSPSeventeen@hotmail.com)  -  GOOD English, Customer Service oriented and great personality!
HOURS:  Mon.-Sat. 4am-9pm!!!!!
(PLEASE make sure to tell him Vicki Connected you and give him a BIG HUG from me!!)
**Interested in learning about moving to Grecia?  Hire Dennis to show you around for a couple hours - introduce you to the town, share the ins and outs, etc. at just $20/hour (note - a regular legal taxi only job is to drive you from Point A to Point B and VERY few speak English.  This is a service above and beyond)!!  He's also starting to look for rentals for the area)

NEED A TAXI OR VAN TO TOUR AROUND?
PICK SOMEONE UP AT THE AIRPORT?

I can hook you up with a GOOD, reliable English-speaking driver that can take you WHEREVER you need to go in Costa Rica!! Especially if you're going at off hours to the airport, it's good to have a taxi that lives in your area!

If you're needing a Tourism Van (a bit more expensive but WELL worth it - especially for transfers or touring around Costa Rica) my MAIN guys are:

PLEASE TELL EVERYONE
“Vicki”
referred•Connected you!!!
(the BIG red-haired gal from Escazu - formerly of Casa Naranja or Casa de Vicki)


PLEASE "SHARE" this link with EVERYONE you know that could use an English-Speaking or Customer-Service-Oriented Taxi Driver
http://LivingLifeInCostaRica.blogspot.com/2012/08/EnglishSpeakingTaxisCR.html