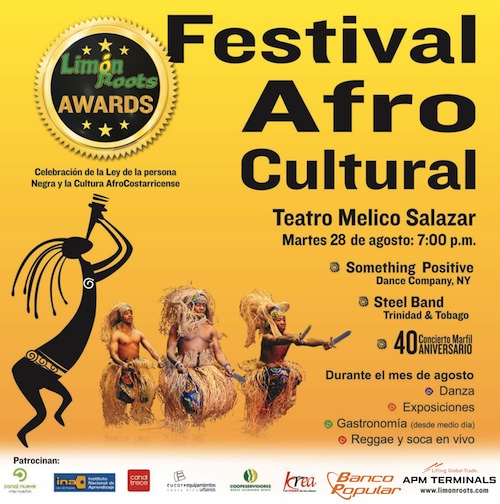 Limón Roots, a Caribbean magazine, will present 7 awards to different women in the Afro-Costa Rican community Tuesday.  The different categories vary from sports and education to business and human rights.

"This one is for us," said Haydée Jimeñez, cultural promotor for Limón Roots.

A special, sentimental award will be given out called Abuela.  In the black culture, the woman has been the backbone of the family throughout time, giving love, food and support to the community.  This is an award from the heart to thank and honor a woman's strength, Ms. Jimeñez said.

This event is one of many during the Afro-cultural Limón Roots Festival that started Sasturday.  It aims to promote the revival of values, traditions and customs of Afro-descendants and to promote a greater knowledge of the Costa Rican population on the culture of the black ethnic group of the Costa Rican Caribbean.

The two-week event celebrates the day of the black person, as well as unites African cultures across the Caribbean. Aug. 31 is Dia de la Persona Negra y La Cultura Afrocostarricense, according to Ley 8938.  Under the law schools are authorized to hold commemorative events related to this day.

The law came about in the late 1970s during the administration of President Rodrigo Carazo, as an initiative led by the union of Costa Rican educators.

Passage of the law, coupled with the rescue, the reconstruction and declaration of the Liberty Hall, also called the Black Star Line, in the city of Limón, as a national historical heritage site has strengthened the community's black pride, said the organization.

In 1991, the people in Limón started having festivals.  The parties were an interchange of cultures and looked for a relationship between other African cultures across the world, said Ms. Jimeñez.

All the festivities conclude with the historic parade "Gala Parade" in Puerto Limón Aug. 31.

Also, the Asamblea Legislativa will have a celebration Aug. 29.  Visitors can buy food, artisan crafts, and music. Nobel
Prize literary figure Quince Duncan and composer Manuel Monestel will speak, and Calypso artists Walter Furguson and Johnny Dixon as well as Olympic athletes Nery Brenes and Sharolyn Scott will be recognized.

The weeks also seek to render tribute and distinction to persons or groups of people of African descent who have excelled for giving important contributions in different sectors of the world.

One of the featured groups will be the Trinidad and Tobago steel band Caribbean All Stars. Caribbean All Stars is also known as The Graduates and has been together 12 years.  This will be the group's fifth visit to Costa Rica.  In the past the band participated in the Flores de la Diaspora African Festival, said band leader Michael Charles.

"The festival celebrates the achievements of blacks.  The steel drum is the only musical instrument created in the last century and it was created by the black man.  It is only fitting that we come and celebrate," said Charles.

The steel drum is made completely out of recycled products. In Trinidad oil is a staple.  People couldn't afford drums, so residents would take the oil containers and bang the sides with bamboo.  The concept progressed into the steel pan drums of today.

"Some people say it is the best piece of recycling produced." said Charles.

Caribbean All Stars is a single pan band because everyone has his or her own drum to play.  The piece is nicknamed luggage, because when traveling its so small it can be a carryon.  Members arrange most of the music themselves and perform from the pop, calypso, reggae, jazz and sulka genres.

"We interpret the mood of the audience and play.  We give it our spice and mix our own blend.  Also, we try to make a link to the audience so they can understand what we are playing."

The Caribbean All Stars will play at the award show Tuesday along with Something Positive Dance Company of New York, and Groupo Marfil of Costa Rica.  This will be Grupo Marfil's 40th Anniversary.


http://LivingLifeInCostaRica.blogspot.com/2012/08/limon-roots-afro-caribbean-culture.html
Posted by Living Life in Costa Rica 1 at 9:16 AM