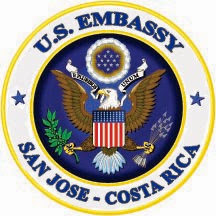 President Obama has made educational exchanges between Latin America and the United States a priority, aiming to host 100,000 students from Latin America in the United States and to send 100,000 students from the United States to schools in Latin America.  On March 18th, Costa Rica hosted the conference New Opportunities for Mobility and International Education, which brought together public and private universities in Central America to share information and experiences to foster educational exchanges.  With the support of U.S. businesses, the Embassy is sending seven Costa Rican students to study in the U.S. for one year.  The Embassy is also working to provide English language instruction to more Costa Ricans, and provided grants to 86 students in San Isidro to study English for two years.

ACS In The Field: Let us speak to your student groups

Consular Officers at the U.S. Embassy in Costa Rica look forward to opportunities to speak to U.S. citizen students who are studying in Costa Rica.  Presenters provide tips to help students avoid becoming victims of crime, outline potential dangers, and provide information on services provided by the U.S. embassy.  If you are expecting a group of students and you would like them to receive a security briefing, please email ACSSanJose@state.gov.

After being defaced a second time, the statue honoring the victims of the September 11th terrorist attacks was restored and moved to a new location.  Artist Roland Hockett traveled to Costa Rica in April to repair the sculpture, which for years stood in San Jose’s Parque 9-11, near the Centro Cultural Costarricense NorteAmericano in Sabana Norte.  Individuals had vandalized the statue two times, peeling off pieces of metal from the artwork.  As a result, the statue was moved to the firefighter training facility in Desamperados.

Dealing with the loss of a loved one is difficult, and managing the deceased person’s affairs and remains in a foreign country is particularly challenging.  Many U.S. citizens are unaware that the Embassy can help families in mourning.  American Citizen Services representatives have experience in helping families repatriate the remains of their family members.  Additionally, the ACS section can help family members obtain Consular Reports of Death Abroad, which the family can use to settle the estate of the deceased U.S. citizen in the United States.  If you would like assistance after the death of a U.S. citizen loved one or know someone who does, please email us at ACSSanJose@state.gov.

The deadline for purchasing health care to comply with the U.S. Affordable Care Act recently passed.  If you live abroad, you may not be required to purchase health insurance, as individuals living in the United States are required to do.  Depending on your residency status and the number of days you spend in the United States each year, you may be exempt.  If you are investigating whether you must purchase insurance to comply with the law, more information can be found on the State Department’s website.

While it’s never too early to register to vote, it quickly becomes too late to vote.  With so much riding on this election, don’t let time get away from you.  The 33 senators, 435 Members of the House of Representatives and the countless state and local leaders who will be elected this fall will shape federal and state issues that will affect you, your children and your grandchildren for decades.  It couldn’t be simpler.   Many states allow voters to print their ballots at home here in Costa Rica and mail them.  U.S. citizens residing overseas citizens (if of voting age) are able to vote for national offices, but generally can only vote for state offices if that particular state considers you a resident.  Twenty-two states, however, allow United States Citizens who have never lived in the country to vote.  It is more difficult than ever to find reasons not to vote.  Find out more at www.fvap.gov.  And remember, you can mail your ballots from your local Costa Rican post office as well as here at the Embassy.  During election season we have a ballot-only mail box at the entrance to the consulate, and we will mail your ballot for you.

I'm actually SLOWLY working on creating an all day workshop to connect you with the right people/steps with dealing with someone dying in Costa Rica to be held in August. If you're interested - send me an email at
LivingLifeInCostaRica@gmail.com