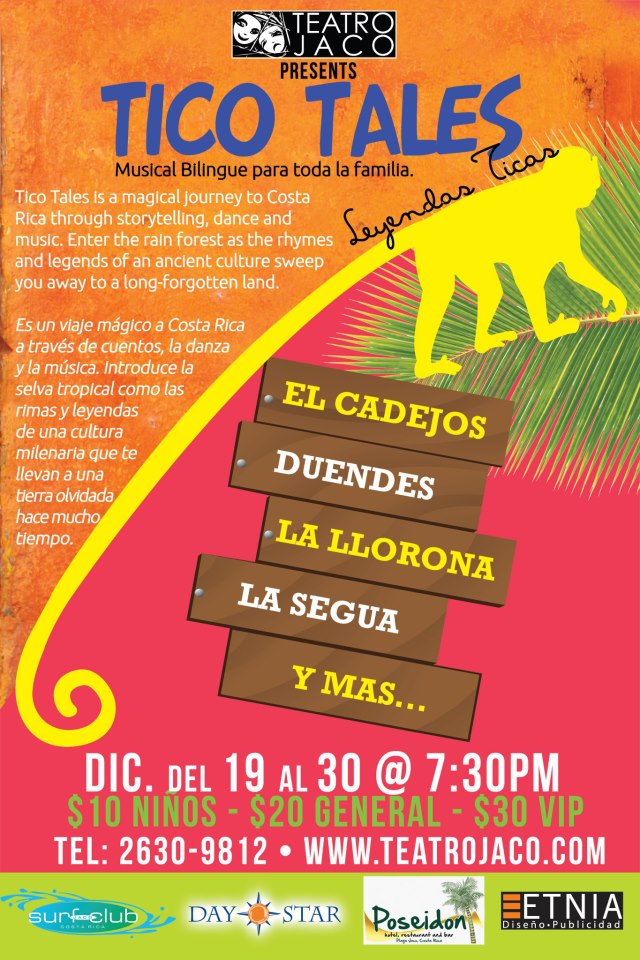 "TICO TALES"
Teatro Jaco to give show based on Tico legends


Teatro Jacó will present "Tico Tales," a bilingual (both in English and Spanish) musical that presents traditional Costa Rican stories.

The musical was written by Michael Sgouros and Brenda Bell.  The two were inspired by Costa Rican culture last December when they brought their version of "A Christmas Carol" to the theater.

The work includes dance, music and nature to explain folk tales and legends of the country.

"Enter the rain forest as the rhymes and legends of an ancient culture sweep you away to a long-forgotten land," said a release. "Hear the call of the beautiful Quetzal bird, stump your foot as the cast and musicians play a drumming tale, sneak a peek into a traditional tribal dance while the little devils chase away the bull and celebrate love with the Indian princess Cira as she is transformed into a volcano.

Quotes from it:
"Are you hear about the "DUENDES":
We are impish little men
Pulling pranks that cause mayhem
We’re the rouges you never see
Causing mischief happily"


Tico Tales is directed by Darren Lee Cole and choreographed by Carlos Ovares.


"This show will captivate your heart and make your heart beat to a new, but ancient drum,” said the theater.

LivingLifeInCostaRica.blogspot.com/2012/12/teatro-jaco-tico-tales.html
.
Posted by Living Life in Costa Rica 1 at 8:26 AM