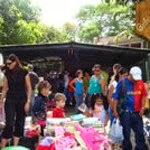 WHERE:
Escazu (Centro) - in the former Robin's Pie's Cafe

DIRECTIONS:
COMING FROM PACO PLAZA:
From Calle Vieja (the old road between San Jose and Santa Ana) turn South (up the hill) at Paco Plaza.
Stay on the main road (do NOT take the road to Le Monastere) as it curves around going towards Escazu Center - following signs for the Cruz Roja/Red Cross.
At the “T” (Snoopy Bar & the Cemetary) turn LEFT.
Go down 3 blocks and she's on the Left mid-way on the road.

COMING FROM THE SCOTIA SPLIT:
Starting at Scotiabank in Escazu:
- Go south, up the hill, past AutoMercado
- Turn right when you come to the light and the "No Hay Paso" (where you HAVE to turn)
- Go past The Pub, stay on this road past the big yellow speed bump
- Cross that intersection where the shoe store is on your right
- You'll see a sign for the Cruz Roja with an arrow to turn left - do NOT turn left
- You jog left/right a tiny bit, keep going straight
- Down the hill, go over the bridge, up the hill and turn left (You are also now
following signs for the Beacon Hotel which is on the same street as Robin's.)
- Go two blocks
- At the second stop sign, you'll see Super Violeta across the street on the
right.
- Turn left here, Robin's is on your left about a half a block, just before the
bridge.


Please "Share" this with everyone you know seeking things!!
LivingLifeInCostaRica.blogspot.com/2013/10/RobinsGarageSale.html
.
Posted by Living Life in Costa Rica 1 at 7:10 PM