They WERE expecting OVER 1 MILLION PEOPLE
(North American version of the word "million" - not the Tico version which means 1,000!)
to come for this SPECTACULAR EVENT!  Which equals - INSANE CROWDS!!!!!!
BUT - alas - it pretty much rained the whole time the strongest rains in the history of this event

3pm  -  Children's Event
(I've seen mention of it but have not found any DETAILS on it)
5:40pm  -  Ceremony Starts
6pm  -  Parade Starts (with a big Fireworks display)
2014 lasted about 3-1/2 hours
(but NOTE - beautiful as it was, a constant theme I heard was it was WAYYYYYY TOOOO SLOW with as much as 30 minutes in between things [that could make ME crazy if it was a loud band!!])

PARADE ROUTE:
3.2 kilometers • 2 miles
The parade will start at the East end of Sabana Park (at the Leon Cortez statue)
Head up/East•Este on Paseo Colon
Turn RIGHT at the South/East corner of Hospital San Juan de Dios (where the Pedestrian Walk starts from Paseo Colon)
Make an immediate LEFT and go up Avenida 2nd•Segundo
and ENDS at Plaza Democracia (just after Calle 13
(TeleTica said it ends in front of the arches•entrance of Barrio Chino•ChinaTown)

(make sure you see "Street Closures" below)


People, People, People
If you're bringing stuff to eat
PLEASE BRING AN EXTRA BAG FOR YOUR TRASH
and
THROW IT AWAY IN A TRASH CAN OR TAKE IT WITH YOU TO DISPOSE OF LATER.

SHOW SOME RESPECT FOR YOUR COUNTRY AND MOTHER EARTH AND
DO NOT LITER YOUR STREETS!!
(sadly, these type of events are great examples of where Costa Rican's are with the environment)


SEE THE FLOATS WHILE AVOIDING THE CROWDS

The Festival de la Luz Parade Floats will line up along the South side of Sabana Park (Sabana Sur) along side the Pista del Sol - Highway #27 (going to/from Escazu West) starting at MIDNIGHT.
Take your time to see•photograph the Floats the day of the Parade by visiting Sabana Park
or get a quickie glimpse (not drivers please to avoid accidents) by driving along the Pista del Sol - Highway #27 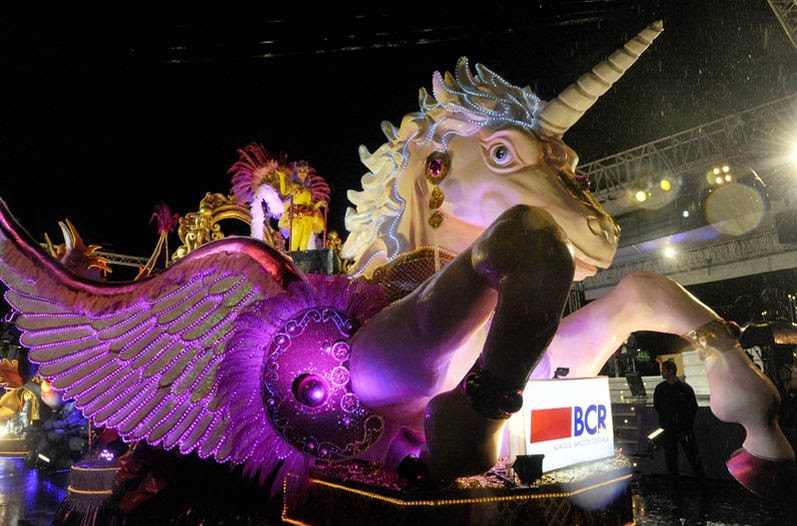 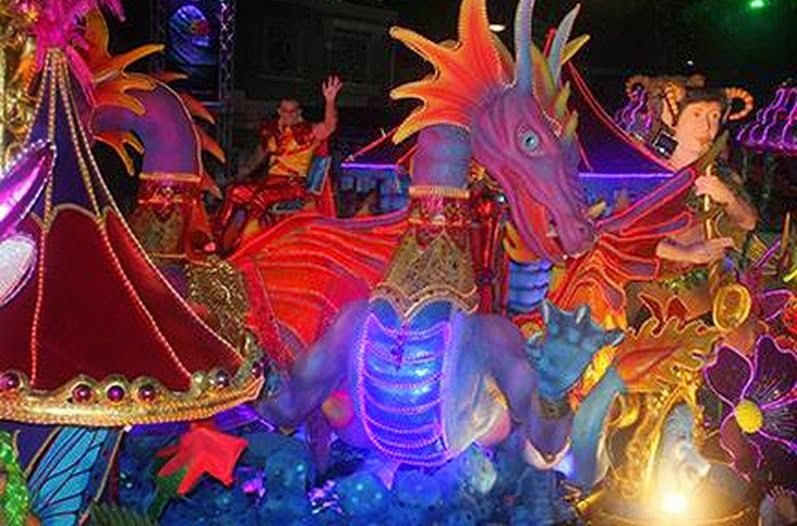 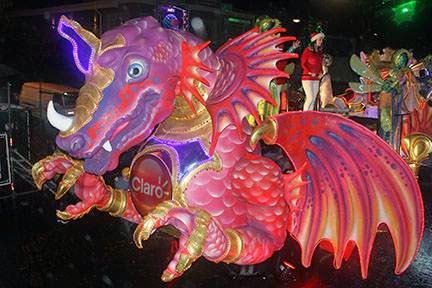 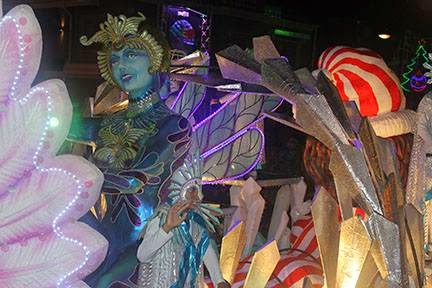 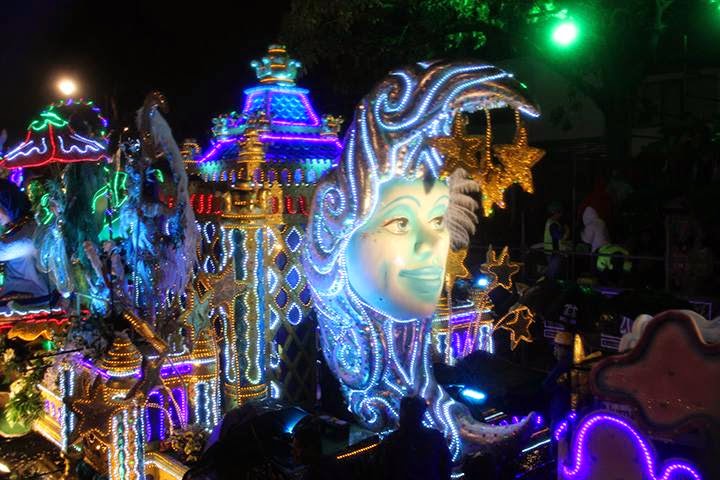 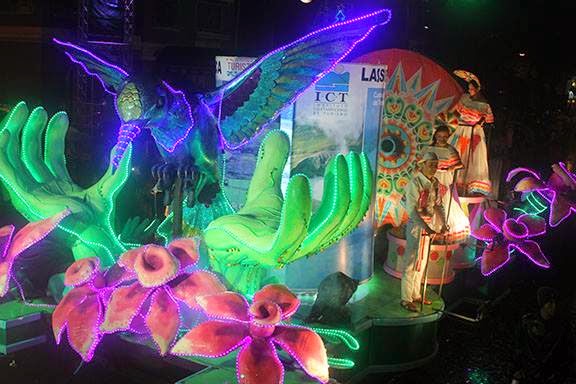 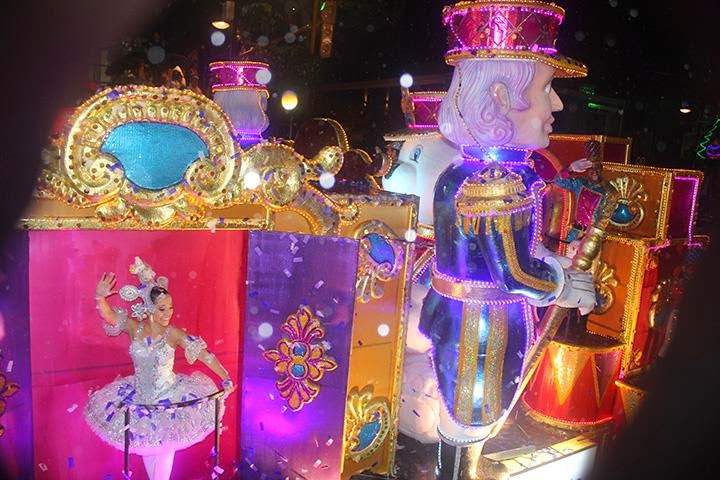 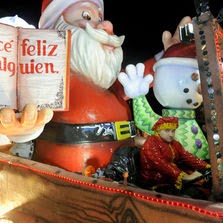 
TRAFFIC WARNING:
They are expecting around ONE MILLION PEOPLE at the parade on Saturday!!
ALL roads leading into/out of San Jose WILL be effected since this is THE BIGGEST EVENT OF THE YEAR and people come from ALL over the country for this so if you're ANYWHERE near a method that brings people ANYWHERE near the parade - you might have HORRIBLE TRAFFIC!!!!

12am/Midnight on Saturday:
The West-Bound lanes of the Pista del Sol - Highway #27 will be closed for the lining up the floats and parade.
So the East-Bound 2 lanes will each on in either direction
(which means traffic WILL be EXTRA backed up since the highway will just be ONE LANE each way!!!  I was on it at 9:15am on Saturday and at that time we were backed up to the Stadium Overpass!!)

12pm/Noon:
from the gym•South•East corner at Sabana Park - to the church of La Soledad
BUT - with the side streets open.

3pm
EVERYTHING will be closed
EXCEPT one of the North•South direction street passage leading to the West side of Hospital San Juan de Dios (but I THINK that might have been for emergencies only).

Calle 42 (the street that runs North•South side on the East side of Sabana Park),
Avenida Paseo Colón and Calle Segundo•2nd - will have limited passage starting at 6am and will be completely closed - I've seen at 11am, 12pm/Noon and 3pm till


TAKE PUBLIC TRANSPORTATION•BUSES or TAXIS
Since parking is MEGA limited (and some lots will jack their prices up for this event), I HIGHLY suggest you consider taking a bus or taxi - BUT - note that ALL buses going to/from San Jose WILL be PACKED and chances are REALLY GOOD you could have a wait just to get on it - let alone the traffic.

BUS ROUTE CHANGES:
Of course there will be MAJOR changes on bus routes with all these street closures.  It will effect 49 bus stop routes STARTING at 12pm/noon•mid-day.
At least these buses will go till 12am/midnight if they need to to get everyone safely home after the Festival de la Luz parage.

Click on this link and keep clicking the RIGHT ARROW showing the Parade Route till it starts giving you the Bus Routes!!!!
Nacion.com/ocio/aire-libre/Vias-cerraran-amanecer_0_1456854333.html

SABANA-STADIUM
NOW at Avenida 12 and Calle 36

SABANA-CEMENTERIO
NOW at Transversal 24 and Calle 36

Taxis of course will NOT be allowed on Paseo Colon or Avenida 2nd•Segundo so just walk North or South 1-2 blocks - BUT - they WILL be few and far between and you'll pay.

(depending on which direction you're going)


PROHIBITED ITEMS
You are NOT allowed to have Chairs, Awnings, Grills and Tables
and the Municipal Police of San Jose could seize them because they represent imminent danger to spectators and could obstruct relief agencies for emergency reasons.
(SOURCE:  TeleTica.com/Noticias/74894-Estos-objetos-estaran-prohibidos-en-el-Festival-de-la-Luz.note.aspx


BRING A JACKET AND AN UMBRELLA
as it DOES get cold with the December Vientos Navideños - Christmas winds and this year they're predicting the possibility for rain
NOTE - it DID RAIN throughout much of the parade - the
WORST RAIN in the history of Festival de la Luz!!!


GETTING LOST
Going with kids or friends?
MAKE A MEET-UP PLAN
and make sure your cell phones are charged (though till WILL be hard to hear it ringing so maybe put it on vibrate close to you.  I grew up 10 minutes from Disneyland and going there a LOT and my mom would dress us all up alike so it was easy to find each other.
Also, have a picture of ALL your kids [individually] on your cell - JUST in case!!
There will be over 1,000 police out in force so look for one [more and more are speaking English but there's ALWAYS someone within shouting reach that can help you if you need it!
It's SOOOO MUCH BETTER to BE PREPARED!!  Then less panicking•wasted time happens I find!!!!)


SAFETY WARNING!!
Thieves are out in FULL FORCE at this so do NOT put ANYTHING in your pockets, put your purse•backpack in front of you & have your hands on it at ALL times!!
BE STREET WISE!!


DRUNK DRIVERS
This event is NOT the drunk fest that many of the parades are [like the Tope] but there are some fools that must drink and the TRANSIT POLICE WILL be in FULL FORCE!!)


NOT INTO CROWDS OR PARADES?
This is LITERALLY THE BEST TIME in December to go
SHOPPING
since the masses are watching the parade (just make sure to finish BEFORE the crowds !!!
(too bad banks are not open during this time)


SEE THE CHRISTMAS LIGHTS AFTER (withOUT the crowds!!!)
Go driving up and down Paseo Colon and Avenida 2nd•Segundo starting the day after the parade (even better if you're in the Central Valley - go driving around between December 26-30 when the streets are practically empty at night because MANY have gone to the beach!!) until New Years Day to see the COOL lights over the street and various buildings!!!


PET OWNERS
FIREWORKS WARNING:
The parade kicks off with a big fireworks display at 6pm and in the past there were lots of fireworks going off so PLEASE PLEASE PLEASE prepare your pets - ESPECIALLY those that freak out from the sounds of fireworks
(this also ESPECIALLY goes for Christmas Eve and New Years Eve in Costa Rica.
BOTH BIG TIMES for the masses doing fireworks [though Christmas Eve gets especially strong closer to midnight - where New Years Eve is pretty much throughout the night])!!!