BRIDGE - Where to PLAY BRIDGE around Costa Rica

FORMAT
Friendly Duplicate Bridge, which means everyone ends up playing the same hands-and luck is eliminated.
They don't charge anything to join the 'club'.  They're a loose association of folks who enjoy playing bridge.  When they play at Don Yayo's they 'charge' a table fee of 1,000-c which goes to tip their watchie-watchie and the waiter who covers their portion of the serving area.  Tourists are encouraged to play, in fact their games in Jan-Feb-March grown to 5-6 tables with the addition of 'snowbirds'.

WHERE:
Chicharronera Don Yayo's Restaurant
2-446-5901 (if you get lost)
(2km NORTH of Atenas Central - on your LEFT on Highway 3 as you approach Atenas - opposite the Oxcart Monument)

They say "We're in a bar, we're playing bridge, and we're in Costa Rica.  It doesn't get much better".

They manage to play 20 hands or so.  Come early and enjoy lunch at Don Yayo's.


*John Randall and his wife also host games at their home in Atenas
FRIDAYS - 12:30-4pm
(tell John that Vicki with the blog connected you)

The SAN JOSE BRIDGE CLUB
has regular duplicate games on:
Mondays - 1:30pm - Pairs (for REALLY experienced SERIOUS players) = 4,000-c
Wednesdays - 4:30pm - Pairs (more relaxed) = 4,000-cFridays - 1:30pm - Pairs (SERIOUS playing - NO talking, playing by the rules) = 4,000-cSaturdays - 2pm - Teams (can be teamed up so don't worry about coming solo.  More relaxed) = 4,000-c
NOTE:  This is a MultiLingual group (average - 6 languages spoken there and whatever other nationalities show up!) - with English and Spanish being the dominant ones (but the Spanish speakers all speak English as well).

TOURISTS INVITED TO JOIN IN
but they're 5,000-c each time.

ROHRMOSER:
From the American Embassy -
Go 200-meters/2 blocks West to the corner where the Chinese restaurant/Hotel Isla Verde and TURN RIGHT.
Go 400 meters and TURN RIGHT - (if you go one more block you hit Rohrmoser Boulevard & gone 2 far).
Go 50 meters and it's a private house on the LEFT hand side (they have the only Guard house on the block).

FROM PLAZA MAYOR:
On Rohrmoser Boulevard head WEST.
Pass Park La Amistad
At the Super Boulevard grocery store - TURN LEFT.
Go 100 meters - then TURN LEFT and it's the WHITE HOUSE (a private house) on the LEFT side (the only house on that block with a guard house)

ARNBCR is officially recognized by the World Bridge Federation (WBF) and also by Zone 5 of the WBF, the Central American and Caribbean Bridge Federation (CACBF). In both cases, it is recognized as the National Bridge Organization (NBO) for Costa Rica. This means the ARNB has the responsibility for duplicate games that have international sanction and for selecting players to represent Costa Rica in zonal and international competition.
(from BridgeGuys.com/International/national_bridge_federations.html)


Do YOU know of any other places•groups that PLAY BRIDGE AROUND Costa Rica???

Please email me DETAILS (like you see above) to:
LivingLifeInCostaRica@gmail.com

DO YOU HAVE
PLAYING BRIDGE RELATED QUESTIONS?

For any bridge-related questions/more details, John Randall seems to be quite the contact person around Costa Rica! 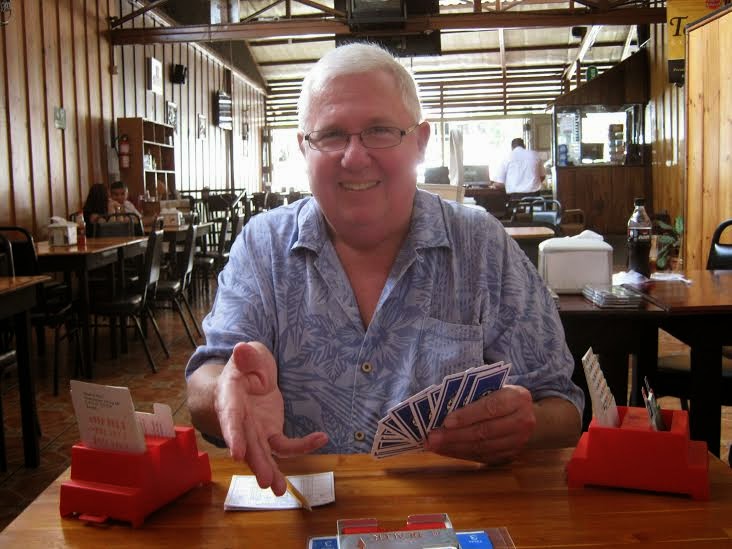 In addition I have 2 e-books published on Kindle e-books:
Beginners Bridge 101
Amazon.com/Bridge-101--Beginners-Be-partner-ebook/dp/B00EG8FHSM/ref=sr_1_2?s=digital-text&ie=UTF8&qid=1417296237&sr=1-2&keywords=john+randall+Beginners+Bridge

Bridge 201 Conventions You Should Be Using
Amazon.com/s/ref=nb_sb_noss?url=search-alias%3Ddigital-text&field-keywords=Bridge+201+Conventions+You+Should+Be+Using

My wife and I travel frequently to the US, primarily frequenting the Florida Regionals, although this year we will have attended Regionals in Colorado Springs, Gatlinburg and the January tournament in Bermuda. We enjoy playing in knockouts and bracketed Swiss. We run two games in Costa Rica; Tuesdays at Don Yayo's bar in Atenas and on Fridays at our house. Our telephone number in Costa Rica is 2446-4138. Give us a call if your travel plans include bridge and Costa Rica!


(FYI - these are
NO GAMBLING
Bridge games)

Back in 2000, Professor Marian Diamond showed that playing bridge boosts the immune system. Bridge requires concentration and while you are playing your brain is kept active and stimulated. It seems that this boosts your immune system.   Professor Diamond wanted to find out if it was possible to use the dorsolateral cortex to boost your immune system. He enlisted the help of twelve ladies in their 70s and 80s. He took blood samples and then asked them to play bridge for an hour and a half. After that, their blood was tested again. A staggering two thirds of these ladies had increased levels of T cells in their bodies – the cells used to fight infection.   Many people find that as they get older their brain seems to slow down. Like muscles, your brain needs to be used to keep it functioning well. People are living longer and many people are concerned about helping their brains to stay active and alert so they can enjoy this longer life to the full.

Playing bridge regularly stimulates your brain and helps keep your memory active and your brain alert. It requires you to use maths, strategy and concentration.

There is an old saying “use it or lose it” – playing bridge helps you to “use it”.

Finally, when you are actually playing the hand, working out the best strategy for maximising the number of tricks won by you and your partner.

Many beginning bridge players concentrate on learning the bidding and forget that learning strategies for play can make a big difference to your overall score. This part of the game is one of the biggest mental challenges, requiring you to concentrate and stay focused long after the actual bidding has finished.

Are there any other health benefits to playing bridge? Of course there are. You will be meeting people and enjoying an active social life. Instead of sitting at home feeling miserable and lonely and with no-one to talk to, you will be engaging in conversations and getting out and about – which will help keep you physically active too.

Nearly a year after I first wrote about why playing bridge is good for your health, I noticed this article by Barbara Lynch Hill - JournalScene.com/article/20130822/SJ11/130829835/1149/a-bridge-game-over-troubled-waters

Barbara writes about meeting a lady called Doris who enjoyed playing bridge but had been housebound while she recovered from an illness.  She discovered that she could play bridge online and quickly made friends with a group of bridge players.  After a few years, they took to meeting up regularly.  Playing bridge online had given Doris an interest to alleviate the boredom whilst she was ill and enhanced her social life when she recovered.