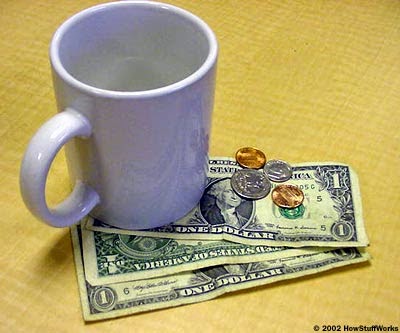 Ahhhh - the age old question in Costa Rica - TO tip - or - NOT to tip!!  Costa Rica is considered more of a NO TIP country since restaurants automaticall take out 13% in taxes PLUS they take out another 10% that many see as the "tip" but it's actually more of a SERVICE CHARGE.

BUT . . . not everyone agrees with that and some of us choose to give some more.

For starters, that 10% sometimes does NOT make it to the employees!!!  Some less than scrupulous owners keep it for themselves.

BUT - IF they do get the tips•propinas - it is typically divided amongst ALL the employees!! Even the bad waiter that didn't do a darn thing for you.
And like in the U.S., food servers do NOT make the standard minimum wage in CR - they make below it.


Costa Rica is SLOWLY learning what "Customer Service" is about. I've lived in San Francisco and had a business in Puerto Vallarta, Mexico - both world class restaurant destinations with EXCELLENT Customer Service which is something I've come to "expect' over the years (MY experience has been in countries that don't tip, Customer Service OFTEN sucks).


So I give an additional 10% & I hand it DIRECTLY to the server.
I look at it this way (not your typical way of seeing things of course [thank Goddess]) - I'm SOOOOO appreciative of someone that goes to the market for me, prepares my food the way I like it (which often is a little "extra" this &/or that), that serves me - and MOST of all - that cleans up after me - if I can't add a little bit more $$•appreciation - I shouldn't be going out.  And I like to be treated WELL.

But I know that I usually get REALLY GOOD service - ESPECIALLY at places I've been a couple+ times & it's not unusual for me to sit down at some of my FAV places where I often order the same thing from - & within minutes of sitting down, there's my club soda with EXTRA EXTRA EXTRA limon or whatever - even if I haven't been in 6-12 months (that's happened at Casona de Laly for me a few times over the past 8+ years).

ANTI-TIPPERS:
For those that say a tip is for those that go above and beyond what they're "SUPPOSED" to do - say WHAT??  Food servers make LESS than the average minimum wage to wait on you - be YOUR slave to YOUR needs . . .

For those that use the excuse of not having $$$ to leave tips, trust me, I have LOTS less $$ coming in than you do and I still feel that if I don't have $$ to give a little extra - I shouldn't be going out.I AM curious to those that have the "No Tip" policy - do you often get REALLY GOOD customer service like many of us tippers get (a feature that's slowly getting into the average culture in CR) - especially at places you're a regular???

I find that LOTS (I'm sure not all) of ExPats that don't tip are just now and have always been in truth CHEAP S.O.B.'s that often don't care a lot about other people - and/or they've listened to their cheap friends on how to act in Costa Rica.

(though I've never worked as a waitress [now THAT would be a joke with my clumsiness and bad memory!!] - this is one profession I REALLY RESPECT because these people OFTEN have to put up with CRAP, demands, lack of respect . . . blah blah blah.
So if giving a TIP•PROPINA helps me get GOOD•GREAT service AND it helps someone else feel good about the job they've done and help them out financially, Tipping works for ME & MY CONSCIOUS!!!!!!

I don't go through life just "accepting what I'm giving" or sucking oxygen.  I wake up EVERY DAY - challenges and ALL and find something POSITIVE in that day and guess what - there is ALWAYS some THING or some ONE that I can find!!

How's YOUR life working for you?  Do you find people often "victimizing" you?  Treating you badly?  Ignoring you?  Stealing from you?  . . . .  What's YOUR feeling about people??  They suck.  They can't be counted on.  You can't trust people . . . I'll bet you have those beliefs reinforced every day!!

WE CREATE what we think!!!

Everyone has to do what works (or doesn't) for them!


(with all this said, I only learned about 10 years ago that you tip on the PRE-taxes & charges. AND, it's best to NOT put the tip on a credit card since businesses are often charged 4-7% in Costa Rica to process a credit card & sometimes that processing fee comes out of that "tip".

Posted by SarongGoddess at 10:05 PM