UPDATES
on the status of the General Canas Highway 1
Sinkhole fiasco in San Jose, Costa Rica
For the latest news and picture (including some GOOD ones I took driving over the new Bailey Bridge on July 4!) go to:
http://LivingLifeInCostaRica.blogspot.com/2012/07/SinkholeUpdates.html 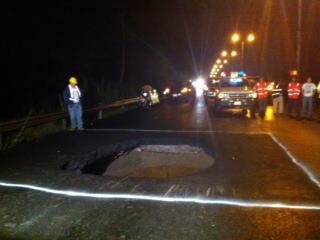 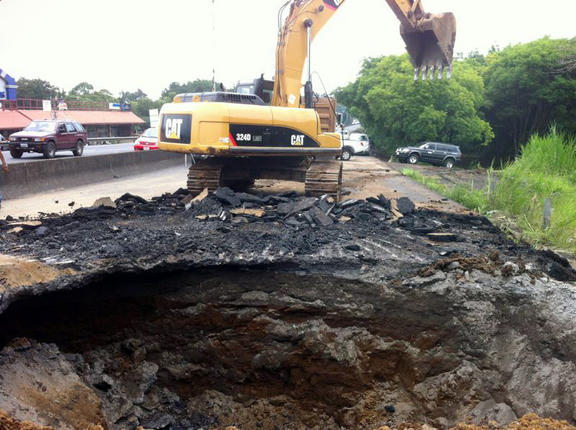 
SO WHAT THE HECK HAPPENED????
They said that a tree trunk clogged the sewer system below the highway, and with the heavy rains we were having - it caused a buildup of water and the collapse in the road - reportedly 3.5 meters wide (nearly 12 feet) by 4 meters deep (13 feet)!  I've yet to see anywhere if it just sank or was someone caught in it or . . . .????
(QUESTION:  So if it was a tree trunk that clogged the sewer system - wouldn't now be a GREAT time to do a BIG campaign reminding people NOT to throw their lawn/tree cuttings into rivers??  I saw it TWICE this past weekend!!)

WHERE DID IT HAPPEN?
On the West-bound/North side lanes of the General Canas Pista/Highway 1 - coming FROM San Jose - heading towards Alajuela - just after the Juan Pablo II Bridge in La Uruca  -  OR  -  JUST East of Plaza Los Arcos (see my pictures on the "Updates" page).

WHAT'S BEING DONE FOR NOW • WHAT'S THE INTENTION FOR FIXING IT?
IMMEDIATE TEMPORARY FIX  -  On July 3, 2012 (5am), 2 TEMPORARY 30 meter (about 98 feet) long "Bailey Bridges" were placed across the WEST-Bound/North side of the General Canas Highway 1 to cover the big sinkhole - thus allowing this section of the highway to RE-OPEN.  In the meantime, they're working 24/7 UNDERneath on the REAL problem.  (who wants to put bets on how long this will take????  [I'm "feeling" - 8 months!!]).  These bridges are meant to support up to 40 tons (personally I wouldn't want to go over behind a big truck or - but hey - that's just me).

HOW TO GET AROUND?(even though this is over, I'm leaving the info in here - JUST in case it may come in handy again)
There are basically only a few options -
Go through Heredia through Downtown
OR
There is a temporary route that goes through El Coyol in the province of Alajuela
OR
Carretera Caldera AutoPista del Sol #27 getting off at Lindora•Santa Ana•Pozos•Airport and zig-zagging around (best bet is to just follow the flow as it's not easy explaining how to get there)
OR
TRAINS:  The train from Heredia to San Jose has extended their service hours from 5am till noon and 3-7:30pm.
BUT

It WAS HORRENDOUS  TRAFFIC!!!!
(FIRST HAND EXPERIENCE:  This is an UNDERSTATEMENT!!!  Wednesday night my bud Diane and I left Escazu - near Country Day school - at 6:30pm and we got to a friends house UPPPPP in the mountains above Centro Santa Ana - 1-1/2 hours LATER!!  This is normally a 20 minute drive. Before coming up to the Cruz Roja, we commented how it should clear up near the corner when "EVERYONE" is rushing to Lindora but NO ONE was going that way then!!  EVERYONE was following us!!)

WHAT'S BEING DONE TO RESOLVE THE SITUATION:
http://AMCostaRica.com reported that Transportation officials revealed a contingency plan for dealing with the sinkhole at a 3 p.m. press conference on Wednesday. Traffic Police will work with the Public Security Ministry to implement reversible lanes on the side of the highway not affected by the sinkhole. Barriers will be placed around the obstacle, and public transportation will receive priority on the route. The lanes will be made available from 5 a.m.-9 p.m.

Light vehicles also will be allowed to use the reversible lanes, but semis and other heavy vehicles are prohibited during rush hour from 4-7:30 p.m. Officials encourage travelers to use public transportation if planning to use the route.

Traffic Police Director Diego Herrera said airport passengers also will be given priority on the route. Passengers need to show only a passport, ticket or luggage to gain access to the bypass.

In addition, the railway that connects Heredia to San José will extend its hours while repairs continue. The first train will run at 5 a.m. and service will continue until noon. Afternoon trains will start at 3 p.m. and run until 8 p.m.

José Luís Salas, director of the National Roadway Council, said construction workers will install two 24-meter Bailey bridges over the sinkhole. Salas said a crew will be working nonstop, rain or shine, to put in place the bridges. The portable metal bridges are on site, and Salas expects they'll be ready for use by the weekend. Salas said the cost of the operation is unknown. Workers have been cleaning debris from the site since early Wednesday morning.

Silvia Chaves, a spokeswoman for Aeris, the company that manages Juan Santamaría International Airport, said officials are doing all they can do accommodate late-arriving airline passengers.

“We set up a special protocol to deal with the passengers as they arrive. They are given priority for immigration procedures, taxpaying and access to the planes. The terminal is working as usual. There have been no delays so far,” Chaves said.

She said flights have not been delayed due to tardy crew members, since most airline workers stay at hotels near the airport. She said some passengers have missed their flights, but it is up to each airline to resolve those issues.

The National Tourism Chamber stated that a United Airlines flight to Houston that left at 11:45 a.m. Wednesday was missing 40 passengers. Taca airlines said it’s waiting an extra 10 minutes before closing check-in for flights.

SOME SOLUTIONS(ish):
http://AMCostaRica.com reported that Transportation officials revealed a contingency plan for dealing with the sinkhole on Wednesday which includes Traffic Police working with the Public Security Ministry to implement REVERSIBLE LANES on the side of the highway not affected by the sinkhole. Barriers will be placed around the obstacle, and public transportation will receive priority on the route. The lanes will be made available from 5am-9pm (I've also seen till 10pm????).


HMMMMMM
Is THIS the SAME area that had work done on it just 2 years ago????  Anyone answered WHY it wasn't properly fixed then???

GOING TO SJO AIRPORT?
FLYING IN OR DEPARTING COSTA RICA and
NEED A PLACE TO STAY NEAR THE AIRPORT?
Where to stay if flying out of SJO!
CARIARI Bed and Breakfast is the PERFECT place for you to stay so you're not effect by this NIGHTMARE!!  Tell owner Laurie that Vicki Connected you and say hola to Victor and Ericka from me!!!])
2-239-2585-CR  •  1-360-588-2286-from the U.S.  •  Laurie@CariariBB.com
http://CariariBB.com