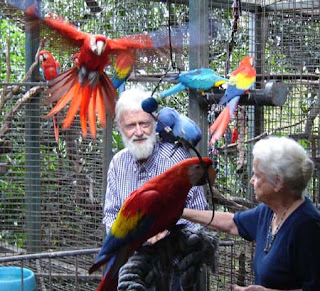 Richard and Margo Frisius, founders of Amigo de las Aves - http://HatchedToFlyFree.homestead.com/AAdlA/AAdlA.html ( now run by http://TheARAProject.org  /  http://facebook.com/TheARAProject.org ) - a Scarlet and Great Green Macaw breeding and reintroduction into the wild program initiated the movement to save these birds located in Alajuela, Costa Rica.

Since 1980 they had dedicated their lives exclusively to the recuperation of these species which until the last few years were well on their way to extinction in Costa Rica.

Margo passed away 4 years ago and today on Father's Day (June 17, 2012) - 93 year old Richard joined her.  Richard's daughter Carol had taken him to her home in Massachusetts just 2 months ago because of his failing health.

If any of you have been lucky enough to have witnessed the fiery majesty of watching a flock of Scarlet Macaws fly in the wild you have this man and his wife to thank. It is truly a great legacy to have left this life knowing that for generations to come the wonder of this species will not be lost here in Costa Rica.


If anyone would like to express their condolences to the family you can email his daughter Carol Stanley at CarolFStanley@gmail.com  (tell her Vicki from Unity Connected you) 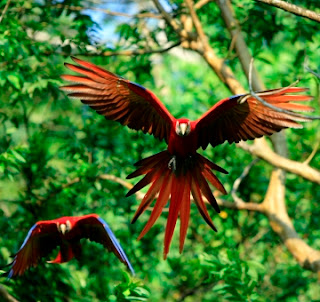 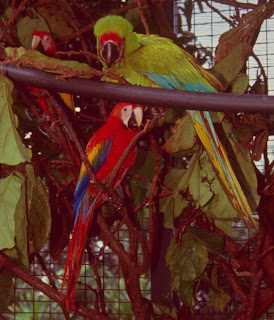 HELP KEEP THIS PROJECT (and the Macaws) ALIVE
(and the memory of these special people)!!!

If you would like to honor this man and the AMAZING work he and his wife started as well as the Costa Rica Macaws by helping to keep this INCREDIBLE project alive - consider making a donation in Richard's honor.

Interesting timing - JUST this past Friday, the Tico Times JUST did a WONDERFUL story on where this project is now/going and their needs:
http://TicoTimes.net/Current-Edition/Saving-the-great-green-macaw_Friday-June-15-2012

From the print edition

Just a few kilometers away from the screaming jet engines of Juan Santamaría International Airport sits a humble, 4-hectare plot of land lined with chain-link aviaries and guarded by a pack of 17 previously abandoned dogs.

This small outpost northwest of the capital, nestled in the brushy Alajuela hills of Río Segundo, could represent one of the last chances to save one of the world’s largest parrots – the endangered great green macaw (Ara ambiguus).

Worldwide populations of these boisterous birds that can grow up to 33 inches in length were estimated at less than 2,500 in 2008, according to the International Union for Conservation of Nature and Natural Resources. Today, they are listed by the organization as a declining population.

Chris Castles, co-director of the Ara Project, which breeds great green and scarlet macaws at the organization’s Alajuela base, said a more recent global population estimate for the great green macaw falls somewhere between 1,800-2,500, with birds distributed from Central America to Colombia. In Costa Rica, only about 250 wild green macaws remain, tucked away in isolated pockets of jungle.

But Castles and other Ara Project members want to change that.

“We are pretty much the only insurance policy for great green macaws in the world,” Castles said.
Friends of the birds

The Ara Project began in the 1980s when Margot and Richard Frisius bought land in Alajuela and got the area licensed as a zoological park. They started caring for parrots that had been given up by private owners or confiscated by the government.

By the ’90s, Castles said, that small start led to a captive macaw breeding program and the establishment of Friends of the Birds, a nonprofit organization dedicated to macaw conservation. The group first established a scarlet macaw reintroduction program as well as the largest captive great green macaw population in the world.

In 2008, Margot Frisius passed away after transferring control of the project to a trust named the Ara Project.

The Frisius family has allowed the Ara Project to continue its work rent-free as the project developed strategies for reintroducing both great green and scarlet macaws back into the wild.

But that generosity is coming to an end. Castles said the Frisius family has given the project until 2015 to find a new location for the aviaries and breeding program, which house approximately 86 great green macaws and 64 scarlet macaws from days-old chicks to breeding adults and juveniles almost ready for release into the wild.

In response to the break-ins, the project started collecting dogs – 17 of them – and now it is impossible to approach the property without setting off a cacophony of barks and howls that include the shrieks of roughly 150 macaws in aviaries scattered across the area.

Macaws are striking birds, and their bright plumage has done them few favors in terms of conservation. Individual birds might fetch prices of anywhere from a few hundred to several thousand dollars in the illegal pet market. Poaching for the pet trade has been a significant contributor to the decline of macaw species, Castles said.

Loss of habitat to deforestation is the other major factor leading to declining numbers throughout Central America.

“Green [macaws] are harder to breed,” Castles said. “And they are more sensitive [than scarlet macaws]. They are a specialized species evolved to survive off just one or maybe a few types of food.”

Great green macaws feed on the nuts of mountain almond trees. Green macaws also rely on the mountain almond exclusively for nesting, as the trees grow large enough to accommodate the roomy nests in hollow trunks the macaws prefer.

Mountain almond trees are themselves an endangered species as they are selectively targeted for logging for their hard wood for use in construction. In 2008, the Constitutional Chamber of the Supreme Court declared that no almond trees could legally be harvested until both the tree and the great green macaws were no longer endangered  (TT, Sept. 19, 2008).

Loss of habitat and poaching have already reduced the wild great green macaw population in the country to a small pocket near Sarapiquí.

The Ara Project, Castles said, has released more than 100 scarlet macaws – which are also endangered, with a Costa Rican population of about 2,000 – into the wild, mostly in the Osa Peninsula. The group has released 10 great green macaws at a site near Manzanillo on the southern Caribbean coast and plans to release 30 more within the next two years. The hope is that the reintroduced birds in the Manzanillo area will eventually expand their territory to link up with the genetically distinct wild population living around Sarapiquí.
Jenny Pettigrew, the Ara Project’s veterinary technician, oversees much of the macaws’ daily care.
Newly hatched chicks, if there are any, get a commercial macaw formula fed via syringes starting at about 5:30 a.m. The bigger birds, Pettigrew said, get a traditional Tico breakfast of gallo pinto loaded with oils and fats. The birds would not eat rice and beans in the wild, Pettigrew said, but the project, which relies heavily on volunteers to maintain daily operations, doesn’t have the resources to feed more than 100 macaws a steady diet of almonds.

“Then we chop fruit for about two or three hours,” Pettigrew said. “We’re starting to grow enough fruit here to feed the birds.”

In the wild, macaws would eschew fruits in favor of nuts and seeds.

After feeding the birds, Pettigrew and volunteers check nesting boxes for newly laid eggs and do maintenance on the aviaries. With beaks that generate as much as 1,000 pounds per inch of pressure, the great green macaws could bite through their cages and leave, if they were so inclined.

“A green bit me and crushed all the nerves in my finger,” Castles said. “I lost all feeling in it for about six months.”

When there are newly hatched chicks they are weighed and measured daily and fed every hour and a half around the clock.

Lorena Strikic is one of the volunteers currently helping chop fruit, scrub bird poop and generally care for the Ara Project’s macaws.

“I love travelling, I love languages and I love birds,” said Strikic who quit her job in Germany and now pays $5 a day to volunteer at the project. “This is just the super-small contribution to a better world that I could do.”

In a world of rapidly diminishing biodiversity, great green and scarlet macaws offer an opportunity to save two beautiful species, but it’s not just their beauty that makes them worth saving.

Great green macaws in particular are like the giant coalmine canaries of tropical forests, Castles explained, and 50 or 100 years ago the birds could be found in about 98 percent of the country.

“If you lose great green macaws, not only is that one less impressive species in the tropical forest, but [it’s also] an indicator of healthy resources,” Castles said. “Macaws are a signifying species that in a given area you have a healthy tropical forest.”

A private donor has given 4 hectares to the Ara Project for relocation of the aviaries and breeding program near Punta Islita in the northwestern province of Guanacaste. That’s the same amount of land the project enjoys in Alajuela, but the group, which is sponsored by Beirute Refrigeration,  is lacking funds to develop the property with roads, electricity and the multiple aviaries and buildings necessary to relocate.

Castles estimates the project needs to raise approximately $250,000 to make a successful change of venue.

“We’re proving you can do so much with so few resources,” Castles said. “If we had the resources then we could do this all over the region. There is huge potential to spread this project and save not just one species.” 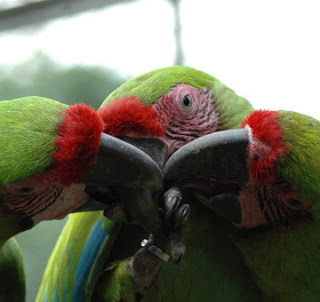 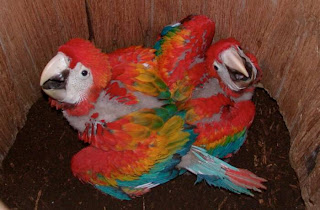 (reminder of here's why you'll donate - to keep these species alive and help breed more babies!!)