We're living in some VERY TRYING times and MY observation (from knowing/speaking with a LOT of people in my nearly 7 years living in Costa Rica) is that Costa Rica is this AWESOME
"HEALING VORTEX"
Sounds good?  Well - yes and not so great because to heal our "stuff" (and we ALL have PLENTY of "stuff" to heal from our childhood and anyone that says otherwise is SOOOO in denial or trying to avoid owning how they've effected their own children's lives I've found!!) - means we GET to go DEEP INSIDE and start breaking down old beliefs/things we were told to come up with new eyes and heart to see the healed child through.

OR - one gets sucked into it - which manifests often through the standard societal ways to avoid our "stuff" like excess in drinking, drugs, gambling, prostitutes as well as other ways like Control, possessiveness, insecurities, avoidance, sabotage and the list goes on.

Costa Rica is DEFINETELY NO exception to these issues so occasionally I'm going to share some Self Empowerment tools I felt were helpful to me (trust me - I've got a LONG way to go myself!!  But MOST days I'm workin' on it!) in hopes someone may find a tool to help them REMEMBER their TRUE SELVES and get back to that!! 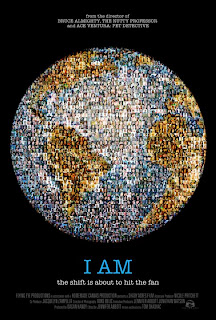 I AM
the movie

From Depression and attempted suicide to Self Empowerment and questioning our existence!!

DESCRIPTION:
I AM, a prismatic and probing exploration of our world, what's wrong with it, and what we can do to make it better, represents Tom Shadyac's first foray into non-fiction following a career as one of Hollywood's leading comedy practitioners, with such successful titles as "Ace Ventura," "Liar Liar," and "Bruce Almighty" to his credit. I AM recounts what happened to the filmmaker after a cycling accident left him incapacitated, possibly for good. Though he ultimately recovered, he emerged a changed man. Disillusioned with life on the A-list, he sold his house, moved to a mobile home community (albeit the exclusive Paradise Cove park in Malibu), and decided to start life anew.

Armed with nothing but his innate curiosity and a camera crew, Shadyac embarks upon a journey to discover how he as an individual, and we as a race, can improve the way we live. Appearing on-screen as character, commentator, guide, and even, at times, guinea pig, Shadyac meets with a variety of thinkers and doers--remarkable men and women from the worlds of science, philosophy, and faith--including such luminaries as David Suzuki, Noam Chomsky, Howard Zinn, Archbishop Desmond Tutu, Lynne McTaggart, Ray Anderson, John Francis, Coleman Barks, and Marc Ian Barasch. An irrepressible Everyman who asks many questions but offers no easy answers, he takes the audience to places it has never been before, and presents even familiar phenomena in completely new and different ways. -- (C) Paladin

In the film, Shadyac conducts interviews with scientists, religious leaders, environmentalists and philosophers including Desmond Tutu, Noam Chomsky, Lynne McTaggart, Elisabet Sahtouris, David Suzuki, Howard Zinn, and Thom Hartmann. The film asks two central questions: What's Wrong With the World? and What Can We Do About it?. It is about "human connectedness, happiness, and the human spirit", and explores themes including Darwinism, Western mores, loneliness, the economy, and the drive to war.